Porter Square Books is delighted to present a virtual talk with Rickie Lee Jones, two-time Grammy winner and author of the newly released memoir, Last Chance Texaco! Jones will appear in conversation with Doug Lockwood of Berklee College, writer of Coolsville, a musical based on Rickie Lee Jones' music and lyrics. This virtual event is ticketed and takes place on Crowdcast. Your ticket comes with a copy of the book! *The first 100 tickets will include a book with signed book plate from Rickie Lee Jones!** 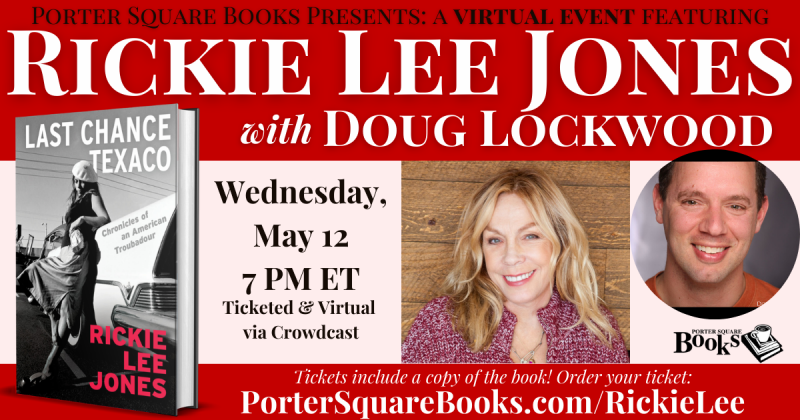 **This event has already taken place.**

This troubadour life is only for the fiercest hearts, only for those vessels that can be broken to smithereens and still keep beating out the rhythm for a new song.

Last Chance Texaco is the first ever no-holds-barred account of the life of two-time Grammy Award-winner Rickie Lee Jones in her own words. It is a tale of desperate chances and impossible triumphs, an adventure story of a girl who beat the odds and grew up to become one of the most legendary artists of her time, turning adversity and hopelessness into timeless music.

With candor and lyricism, the "Duchess of Coolsville" (Time) takes us on a singular journey through her nomadic childhood, to her years as a teenage runaway, through her legendary love affair with Tom Waits and ultimately her longevity as the hardest working woman in rock and roll. Rickie Lee's stories are rich with the infamous characters of her early songs - "Chuck-E's in Love," "Weasel and the White Boys Cool," "Danny's All-Star Joint," and "Easy Money"-- but long before her notoriety in show business, there was a vaudevillian cast of hitchhikers, bank robbers, jail breaks, drug mules, a pimp with a heart of gold and tales of her fabled ancestors.

In this tender and intimate memoir by one of the most remarkable, trailblazing, and tenacious women in music are never-before-told stories of the girl in the raspberry beret, a singer-songwriter whose music defied categorization and inspired American pop culture for decades.

Doug Lockwood is a native of Norwood, MA. Doug returned to Boston in 2003 where he became an Associate Professor of Acting at The Boston Conservatory at Berklee. He is also a founding member of The Actors’ Shakespeare Project (ASP), as well as at the ART, New Rep and Wheelock Family Theatres.  In 2014 Doug devised a musical based on the music and lyrics of Rickie Lee Jones, called Coolsville, which was performed on the Mainstage at The Boston Conservatory at Berklee. Doug lives in Jamaica Plain with his husband, director Antonio Ocampo-Guzman and their son Max.