Porter Square Books: Boston Edition is eager to welcome Valeria Luiselli, editor of The Best Short Stories 2022: The O. Henry Prize Winners, for the anthology's release week event! She will be joined in conversation by the series' editor for the The O. Henry Prize Collection,  Jenny Minton Quigley, and contributors Michel Nieva and David Ryan. We are delighted to present this event in partnership with GrubStreet Creative Writing Center and the Harvard Review.

This in person event will take place on Thursday, September 15 at 7pm at Porter Square Books: Boston Edition. We ask that attendees wear their masks for the duration of the event. Thank you for respecting the safety of our community! 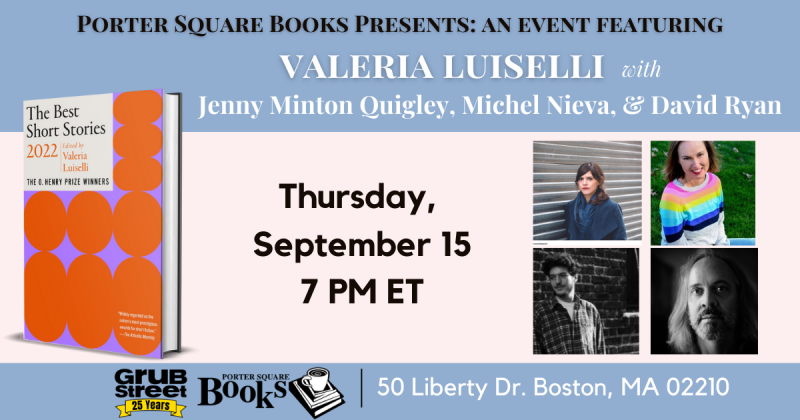 Continuing a century-long tradition of cutting-edge literary excellence, this year's edition contains twenty prizewinning stories chosen from the thousands published in magazines over the previous year. Guest editor Valeria Luiselli has brought her own refreshing perspective to the prize, selecting stories by an engaging mix of celebrated names and emerging voices and including stories in translation from Bengali, Greek, Hebrew, Norwegian, Polish, Russian, and Spanish. The winning stories are accompanied by an introduction by Luiselli, observations from the winning writers on what inspired them, and an extensive resource list of magazines that publish short fiction.

Valeria Luiselli was born in Mexico City and grew up in South Korea, South Africa, and India. She is the author of two essay collections and the novels Faces in the Crowd, The Story of My Teeth, and The Lost Children Archive. The recipient of a MacArthur “Genius Grant,” two Los Angeles Times Book Prizes, an American Book Award, and the 2021 Dublin Literary Award, she has also been nominated twice for the National Book Critics Circle Award and three times for the Kirkus Prize. She is a National Book Foundation “5 Under 35” honoree and the recipient of a Bearing Witness Fellowship from the Art for Justice Fund. Her work has been translated into more than twenty languages.

Jenny Minton Quigley is the author of a memoir, The Early Birds, and editor of the anthology Lolita in the Afterlife. She lives in West Hartford, Connecticut, with her husband, sons, and dogs.

Michel Nieva (1988) was born in Buenos Aires, Argentina. He is the author of the poetry collection Papelera de reciclaje, the novels ¿Sueñan los gauchoides con ñandúes eléctricos? and Ascenso y apogeo del imperio argentino, and the essay collection Tecnología y barbarie. In 2021 he was chosen by Granta magazine as one of the best writers in Spanish under thirty-five years old.

David Ryan is the author of the story collection Animals in Motion (Roundabout Press). His work has appeared in The Threepenny Review, The Kenyon Review, Conjunctions, Bomb, and elsewhere. A recent recipient of an Artistic Excellence fellowship from the Connecticut Office of the Arts, and a past Elizabeth Yates McGreal writer-in-residence, he’s currently at work on a novel.