School of the Arts: Poems (Paperback) 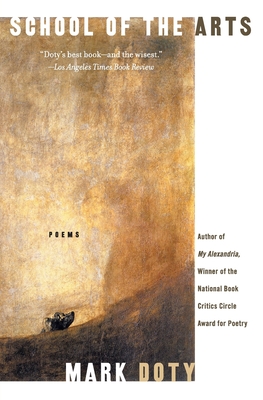 With School of the Arts, Mark Doty's darkly graceful seventh collection, the poet reinvents his own voice at midlife, finding his way through a troubled passage. At once witty and disconsolate -- formally inventive, acutely attentive, insistently alive -- this is a book of fierce vulnerability that explores the ways in which we are educated by the implacable powers of time and desire in a world that constantly renews itself.

Mark Doty's books of poetry and nonfiction prose have been honored with numerous distinctions, including the National Book Critics Circle Award, the PEN/Martha Albrand Award, the Los Angeles Times Book Prize, and, in the United Kingdom, the T. S. Eliot Prize. In 2008, he won the National Book Award for Fire to Fire: New and Selected Poems. He is a professor at the University of Houston, and he lives in New York City.

“Achieve[s] a quiet grandeur with a voice marked by the clarity and thoughtful lyricism that distinguished his earlier collections.” — Ilya Kaminsky, Library Journal, starred review

“Memorable, essential, big hearted, joyous in music ... this is the finest book of poems by one of our finest poets.” — Alan Shapiro