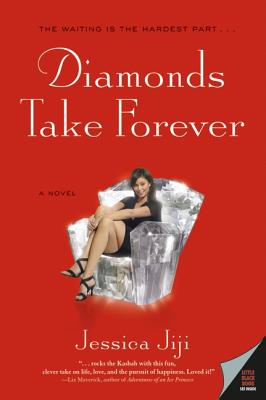 By Jessica Jiji
$12.95
It's Complicated--Contact Us for More Information

If her old-fashioned family had never left Morocco, Michelle Benamou would have been in big trouble, being almost thirty and nowhere near married. Luckily, in the hardy multicultural stew of New York City, she's been able to follow her other dreams, working her way up from broadcast news producer to on-air reporter. Still, there's something sparkly missing from the ring finger of her left hand. . .

Michelle thinks maybe her sexy, ex-Marine boyfriend can provide it -- until Joe abruptly tells her adios. Her old friend Benny from the Bronx is an intriguing possibility -- but he's out in L.A. . . . and not quite divorced.

It's tough for a sexy, very modern urban woman to follow the traditional calls of the marriage muezzins to matrimony -- especially when the rest of her life starts racing rapidly downhill. Suddenly in desperate need of an affordable new Manhattan apartment (an oxymoron), and quite possibly a new career (a catastrophe), Michelle's got other worries besides finding passionate love sealed with an "I do."

But a diamond is just coal, after all, until it's forged by fire and time. And sometimes something precious, strong, dazzling, and enduring can turn up when you least expect it . . .

The daughter of an Iraqi immigrant, Jessica Jiji is a speechwriter for the secretary-general of the United Nations. Her first novel, Diamonds Take Forever, was published in 2005. She lives in New York City with her husband and three sons.