The Fence: A Police Cover-up Along Boston's Racial Divide (Paperback) 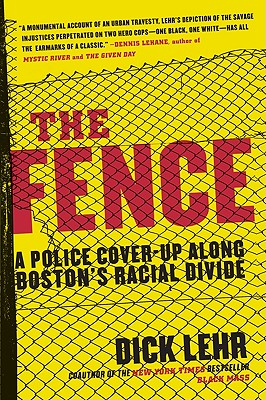 “The Fence is a monumental account of an urban travesty. Dick Lehr’s depiction of one of the darkest chapters in recent Boston law enforcement history and the savage injustices perpetrated on two hero cops—one black, one white—has all the earmarks of a classic.” — Dennis Lehane, author of Mystic River

The Boston police officers who brutally beat Michael Cox at a deserted fence one icy night in 1995 knew soon after that they had made a terrible mistake. The badge and handgun under Cox's bloodied parka proved he was not a black gang member but a plainclothes cop chasing the same murder suspect his assailants were. Officer Kenny Conley, who pursued and apprehended the suspect while Cox was being beaten, was then wrongfully convicted by federal prosecutors of lying when he denied witnessing the attack on his brother officer. Both Cox and Conley were native Bostonians, each dedicating his life to service with the Boston Police Department. But when they needed its support, they were heartlessly and ruthlessly abandoned.

A remarkable work of investigative journalism, Dick Lehr's The Fence tells the shocking true story of the attack and its aftermath—and exposes the lies and injustice hidden behind a "blue wall of silence."

Dick Lehr is a professor of journalism at Boston University. He is the author of six previous works of nonfiction and a novel for young adults. Lehr coauthored the New York Times bestseller and Edgar Award Winning Black Mass: Whitey Bulger, the FBI and a Devil’s Deal, which became the basis of a Warner Bros. film of the same name. His most recent nonfiction book, The Birth of a Movement: How Birth of a Nation Ignited The Battle for Civil Rights, became the basis for a PBS/Independent Lens documentary. Two other books were Edgar Award finalists: The Fence: A Police Cover-up Along Boston’s Racial Divide, and Judgment Ridge: The True Story Behind The Dartmouth Murders. Lehr previously wrote for the Boston Globe, where he was a member of the Spotlight Team, a special projects reporter and a magazine writer. While at the Globe he was a Pulitzer Prize finalist in investigative reporting and won numerous national and local journalism awards. Lehr lives near Boston.

“This could be a case study in the perils of profiling. It isn’t so much forgotten history, as buried. Perhaps this outstanding book can fix that.” — Adrian Walker, Boston Globe

“The Fence is a monumental account of an urban travesty. Dick Lehr’s depiction of one of the darkest chapters in recent Boston law enforcement history and the savage injustices perpetrated on two hero cops—one black, one white—has all the earmarks of a classic.” — Dennis Lehane, author of Mystic River

“Dick Lehr gets inside the heads of cops, criminals, prosecutors and politics better than anyone I know. The Fence is a revealing expose of the blue wall of silence that endangers us all.” — Alan Dershowitz, Harvard Law School

“As gripping a tale as “The Fence” is, it should be mandatory reading for anyone looking to be a cop in Boston . . . or anyplace else.” — Peter Gelzinis, Boston Herald

“Think Serpico translated to Boston. . . . A cautionary tale about the abuse of power and a timely civics lesson on the virtue of standing up to authority.” — Kirkus Reviews

“The Fence makes a compelling case . . . [it] is more than an account of crime, punishment and the blue wall. Lehr weaves the life stories of several key characters into the book.” — Bay State Banner

“Lehr has vividly rendered two tragic stories, exposing a police culture of silence that victimized one of its own while also showing the “by any means necessary’’ mentality of federal prosecutors that destroyed another innocent officer’s reputation. Still missing here are truth and accountability.” — Chuck Leddy, The Boston Globe