The Story of Sushi: An Unlikely Saga of Raw Fish and Rice (Paperback) 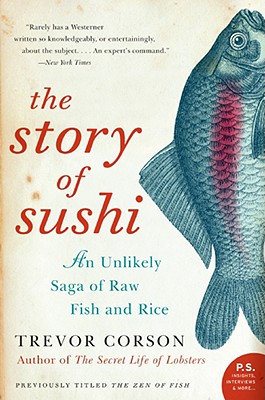 Everything you never knew about sushi— its surprising origins, the colorful lives of its chefs, and the bizarre behavior of the creatures that compose it

Trevor Corson takes us behind the scenes at America's first sushi-chef training academy, as eager novices strive to master the elusive art of cooking without cooking. He delves into the biology and natural history of the edible creatures of the sea, and tells the fascinating story of an Indo-Chinese meal reinvented in nineteenth-century Tokyo as a cheap fast food. He reveals the pioneers who brought sushi to the United States and explores how this unlikely meal is exploding into the American heartland just as the long-term future of sushi may be unraveling.

The Story of Sushi is at once a compelling tale of human determination and a delectable smorgasbord of surprising food science, intrepid reporting, and provocative cultural history.

The author of The Secret Life of Lobsters, Trevor Corson has studied philosophy in China, resided in Buddhist temples in Japan, and worked on commercial fishing boats off the Maine coast. He has written for the Atlantic Monthly and the New York Times and is the only "sushi concierge" in the United States. He lives in New York City.

“One of the best things you can enjoy without melted butter.” — Natural History magazine

“A fascinating story, blending science, politics and history . . . the writing is vivid.” — USA Today on The Secret Life of Lobsters

“Corson serves up a savory blend of history and science along with a satisfying course of lobster and human behavior.” — Boston Herald on The Secret Life of Lobsters

“Trevor Corson’s reverence for all things from the sea is palpable. In his new book The Zen of Fish he takes you on a fascinating journey into the world of sushi. The story he relates is rich in detail, thoroughly engaging, simply a pleasure to get lost in.” — Eric Ripert, executive chef and co-owner of Le Bernardin, and author of “A Return to Cooking” and “Le Bernardin Cookbook: Four-Star Simplicity.”

“The Zen of Fish is a pleasure to read, entertaining and informative, with compelling characters and fascinating history, all told in an easy and natural voice. Excellent food journalism.” — Michael Ruhlman, author of The Soul of a Chef

Corson leaves no detail unexplained, and true food nerds will appreciate his rigor....fascinating.... you’ll still be lining up to order your favorite snack, but with renewed appreciation. — Penthouse

“Corson garnishes the tale with plenty of interesting tidbits. . . . Sushi fans may devour the information in The Zen of Fish.” — Wall Street Journal

“The Zen of Fish” tells us everything we could possibly want to know about every aspect of sushi. — Boston Globe

“Rarely has a Westerner written so knowledgeably, or entertainingly, about the subject. . . . The reader emerges not only enlightened but a much better sushi eater. — New York Times

“Since sushi has become so popular in America, [Trevor Corson’s book] The Zen of Fish is now as relevant to the average American diner as other popular works of food-related journalism like Eric Schlosser’s ‘Fast Food Nation’ or Michael Pollan’s ‘The Omnivore’s Dilemma.’” — Solares Hill Key West

“A meticulously reported account. . . . Corson proves a master at providing a non-stop banquet of tasty morsels sure to delight anyone who has taken a seat at a sushi bar.” — Seattle Post-Intelligencer

“Authoritative, often amusing, chapters on sushi history, marine biology and the physiognomy of taste. While the students hack away at mackerel, Corson serves up bite-size explanations. . . . His chapter on rice, a subject that Americans take for granted, is itself worth the price of the book.” — New York Times Book Review

“Riveting . . . Corson beautifully intersperses the drama with lessons about the history and science of each fish . . . along with the rice and wasabi. . . . The combination of culinary insights and personal drama makes for one of the more compelling food-themed books in recent years.” — Publishers Weekly (starred review)