Intellectuals: From Marx and Tolstoy to Sartre and Chomsky (Paperback) 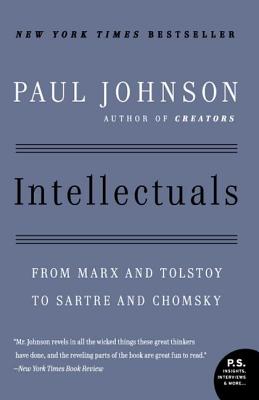 By Paul Johnson
$16.99
It's Complicated--Contact Us for More Information

"Johnson revels in all the wicked things these great thinkers have done...great fun to read."  — New York Times Book Review

Paul Johnson is a historian whose work ranges over the millennia and the whole gamut of human activities. He regularly writes book reviews for several UK magazines and newspapers, such as the Literary Review and The Spectator, and he lectures around the world. He lives in London, England.

"Johnson revels in all the wicked things these great thinkers have done...great fun to read." — New York Times Book Review

“Here’s a book that should have a cleansing influence on Western literature and culture for years to come.” — Malcolm Forbes, Forbes

“So full of life and energy and fascinating detail, and so right for the moment, that anyone who picks it up will have a hard time putting it down.” — Norman Podhoretz, New York Post