The Hotel on Place Vendome: Life, Death, and Betrayal at the Hotel Ritz in Paris (Hardcover) 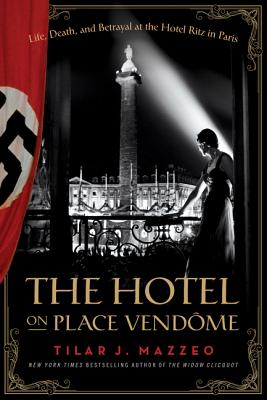 By Tilar J. Mazzeo
$26.99
It's Complicated--Contact Us for More Information

Author Tilar Mazzeo brings to life the magic of the Hotel Ritz, the glorious luxury hotel in the heart of Paris, during the Occupation. Despite the raging war, the hotel carries on becoming the headquarters for Hermann Goring and home to the rich and famous, including Coco Chanel. Rich in atmosphere and intrigue, The Hotel on Place Vendome is a fascinating portrait of Paris, World War II and a hotel that somehow survived it all and continues to thriveto this day.

— From The Hotel on Place Vendome

Set against the backdrop of the Nazi occupation of World War II, The Hôtel on Place Vendôme is the captivating history of Paris’s world-famous Hôtel Ritz—a breathtaking tale of glamour, opulence, and celebrity; dangerous liaisons, espionage, and resistance—from Tilar J. Mazzeo, the New York Times bestselling author of The Widow Clicquot and The Secret of Chanel No. 5

When France fell to the Germans in June 1940, the legendary Hôtel Ritz on the Place Vendôme—an icon of Paris frequented by film stars and celebrity writers, American heiresses and risqué flappers, playboys, and princes—was the only luxury hotel of its kind allowed in the occupied city by order of Adolf Hitler.

Tilar J. Mazzeo traces the history of this cultural landmark from its opening in fin de siècle Paris. At its center, The Hotel on Place Vendôme is an extraordinary chronicle of life at the Ritz during wartime, when the Hôtel was simultaneously headquarters to the highest-ranking German officers, such as Reichsmarshal Hermann Göring, and home to exclusive patrons, including Coco Chanel. Mazzeo takes us into the grand palace’s suites, bars, dining rooms, and wine cellars, revealing a hotbed of illicit affairs and deadly intrigue, as well as stunning acts of defiance and treachery.

Rich in detail, illustrated with black-and-white photos, The Hotel on Place Vendôme is a remarkable look at this extraordinary crucible where the future of post-war France—and all of post-war Europe—was transformed.

Tilar J. Mazzeo is the author of numerous works of cultural history and biography, including the New York Times bestselling The Widow Clicquot, The Secret of Chanel No. 5, and nearly two dozen other books, articles, essays, and reviews on wine, travel, and the history of luxury. The Clara C. Piper Associate Professor of English at Colby College, she divides her time between coastal Maine, New York City, and Vancouver Island, British Columbia.

“This gorgeously written (and photographed) book is a feast for readers wanting to be swept away this summer. . . . Tracing the captivating history of Paris’s world-famous Hôtel Ritz, Mazzeo reveals a hotbed of illicit affairs and deadly intrigue, as well as stunning acts of defiance and treachery.” — Brad Thor, The Today Show Summer Reads

“Stolen art, double agents, a legendary bartender passing notes to the resistance: This is a rich, messy history.” — Kirkus Reviews

“Mazzeo pulls back the heavy curtains of the Ritz in Paris to reveal a steamy world of sex, drugs, partying and political intrigue.” — Alan Riding, author of And The Show Went On: Cultural Life in Nazi-Occupied Paris

“Mazzeo enthrallingly depicts a hotbed of both the magnificent and the mundane. . . . Readers will enjoy Mazzeo’s fascinating collection of secretive, scheming historical characters, all under one elegant roof.” — Publishers Weekly

“Fiction could not write betrayal, resistance, collaboration, or celebration with more robustness or with a more alluring who’s-who of writers, artists, and military powers than history did in this single hotel. ” — Booklist

“Tilar J. Mazzeo tells the tale of the Hotel Ritz, a landmark so imbued with glamour that it was the only hotel in Paris the Nazis ordered to stay open during the war. The antics at and around it during World War II were often shocking.” — New York Post

“Must read. . . . Mazzeo artfully transports readers to the Nazi occupation of World War II . . . The Hôtel on Place Vendôme contextualizes the opulence of 1940s Paris, making for a work of history that reads as enticingly as a novel.” — Harper's Bazaar

“An illuminating history of the intrigue and drama taking place inside its elegant façade. . . . The narrative reads like fiction, with the difference being accurate testimony from well-researched documents and interviews.” — Bookreporter