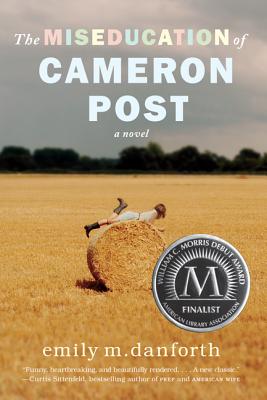 Emily M. Danforth's debut novel tells the story of a young girl growing up in rural Montana after the tragic death of both of her parents. Coming to understand her sexuality is further complicated when her conservative aunt discovers her relationship with her best friend and Cameron is sent away to a religious conversion therapy school. Danforth handles the difficulties of family life and identity with nuance and grace in this beautifully rendered coming of age tale.

"LGBTQ cinema is out in force at Sundance Film Festival," proclaimed USA Today. "The acerbic coming-of-age movie is adapted from Emily M. Danforth's novel, and stars Chloë Grace Moretz as a lesbian teen who is sent to a gay conversion therapy center after she gets caught having sex with her friend on prom night."

The Miseducation of Cameron Post is a stunning and provocative literary debut that was named to numerous best of the year lists.

When Cameron Post’s parents die suddenly in a car crash, her shocking first thought is relief. Relief they’ll never know that, hours earlier, she had been kissing a girl.

But that relief doesn’t last, and Cam is forced to move in with her conservative aunt Ruth and her well-intentioned but hopelessly old-fashioned grandmother. She knows that from this point on, her life will forever be different. Survival in Miles City, Montana, means blending in and leaving well enough alone, and Cam becomes an expert at both.

Then Coley Talor moves to town. Beautiful, pickup-driving Coley is a perfect cowgirl with the perfect boyfriend to match. She and Cam forge an unexpected and intense friendship, one that seems to leave room for something more to emerge. But just as that starts to seem like a real possibility, Aunt Ruth takes drastic action to “fix” her niece, bringing Cam face-to-face with the cost of denying her true self—even if she’s not quite sure who that is.

Don't miss this raw and powerful own voices debut, the basis for the award-winning film starring Chloë Grace Moretz.

★ “The story is riveting, beautiful, and full of the kind of detail that brings to life a place (rural Montana), a time (the early 1990s), and a questioning teenage girl.” — Publishers Weekly (starred review)

“Cameron is a memorable heroine with an unforgettable and important story to tell, and she does so with wit, emotion, and depth.” — Bulletin of the Center for Children’s Books

“If Holden Caulfield had been a gay girl from Montana, this is the story he might have told—it’s funny, heartbreaking, and beautifully rendered. Emily Danforth remembers exactly what it’s like to be a teenager, and she has written a new classic.” — Curtis Sittenfeld, bestselling author of PREP and AMERICAN WIFE

“A beautifully told story that is at once engaging and thoughtful. THE MISEDUCATION OF CAMERON POST is an important book—one that can change lives. ” — Jacqueline Woodson, award-winning author of AFTER TUPAC AND D FOSTER and HUSH

“This novel is a joy—one of the best and most honest portraits of a young lesbian I’ve read in years. Cameron Post is a bright, brash, funny main character who leaps off the page and into your heart! This is a story that keeps you reading way into the night—an absorbing, suspenseful, and important book.” — Nancy Garden, author of ANNIE ON MY MIND

“Danforth’s narrative of a bruised young woman finding her feet in a complicated world is a tremendous achievement: strikingly unsentimental, and full of characters who feel entirely rounded and real. A story of love, desire, pain, loss—and, above all, of survival. An inspiring read.” — Sarah Waters, author of THE LITTLE STRANGER