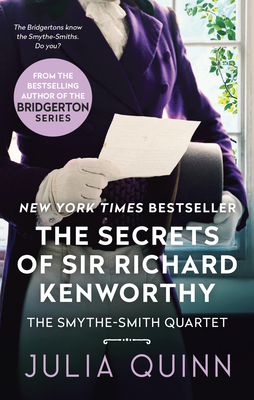 From #1 New York Times bestselling author, and creator of the Bridgerton series, Julia Quinn presents the fourth and final installment in the Bridgerton adjacent Regency era-set world featuring the romantic adventures of the well-meaning but less-than-accomplished Smythe-Smith musicians. In this case, cellist Iris Smythe-Smith finds herself courted by a suspiciously eager nobleman—but is he only playing with her heartstrings?

Sir Richard Kenworthy has less than a month to find a bride. He knows he can’t be too picky, but when he sees Iris Smythe-Smith hiding behind her cello at her family’s infamous musicale, he thinks he might have struck gold. She’s the type of girl you don’t notice until the second-or third look, but there’s something about her, something simmering under the surface, and he knows she’s the one.

Iris Smythe-Smith is used to being underestimated. With her pale hair and quiet, sly wit she tends to blend into the background, and she likes it that way. So when Richard Kenworthy demands an introduction, she is suspicious. He flirts, he charms, he gives every impression of a man falling in love, but she can’t quite believe it’s all true. And when his proposal of marriage turns into a compromising position that forces the issue, she can’t help thinking that he’s hiding something...even as her heart tells her to say yes.

#1 New York Times bestselling author JULIA QUINN began writing one month after graduating from college and, aside from a brief stint in medical school, she has been tapping away at her keyboard ever since. Her novels have been translated into 43 languages and are beloved the world over. A graduate of Harvard and Radcliffe Colleges, she lives with her family in the Pacific Northwest.

Look for BRIDGERTON, based on her popular series of novels about the Bridgerton family, on Netflix.

“This is the last volume in the delightful Smythe-Smith Quartet, a series that highlights Julia Quinn’s inimitable mix of charm, wit and breathtaking romance.” — NPR on The Secrets of Sir Richard Kenworthy

“RITA Award–winning Quinn wraps up her Smythe-Smith quartet in splendid fashion as she once again successfully marries sparkling wit with seductive passion to create another swoon-worthy love story.” — Booklist (starred review) on The Secrets of Sir Richard Kenworthy

“Witty, sexy, and often quite funny…a heartwarming story that won’t disappoint.” — Library Journal on The Secrets of Sir Richard Kenworthy

“Quinn strives to strike a chord with readers, and she has the rare ability to turn an unsympathetic man into a hero—no easy feat. There’s humor, sensuality and poignancy blended in perfect amounts into a plot that twists the marriage-of-convenience theme in ways that are sure to intrigue readers.” — RT Book Reviews on The Secrets of Sir Richard Kenworthy

“Secrets abound in Julia Quinn’s The Secrets of Sir Richard Kenworthy, and all of them are well worth discovering.” — Heroes and Heartbreakers