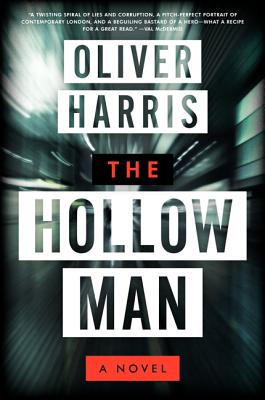 By Oliver Harris
$15.99
It's Complicated--Contact Us for More Information

This is book number 1 in the Detective Nick Belsey Series series.

A straight-out-of-the-gate crime masterpiece by first-time author Harris.  Something about the UK produces knockout first  novels by crime writers - The Ghosts of Belfast; The Guards. This is another one.
Gary

— From The Hollow Man

“A twisting spiral of lies and corruption, a pitch-perfect portrait of contemporary London, and a beguiling bastard of a hero—what a recipe for a great read.”
—Val McDermid, author of The Mermaids Singing

Describing London police detective Nick Belsey, hero of The Hollow Man, an enthrallingly original thriller from British crime novelist Oliver Harris—the Daily Mail declared, “He’s got to be London’s coolest cop.” Crime fiction fans are sure to agree, especially those hooked on the novels of Ian Rankin, Peter Robinson, Mark Billingham, and Jo Nesbø. The first book in a series of tense and twisting police procedurals, The Hollow Man starts with Belsey at rock bottom, and then embroils him in a brazen identity theft scam and possible murder that could leave him either wealthy or dead. It’s time to discover Oliver Harris, a new master of noir who’s destined to be a big man at the scene of the crime.

Oliver Harris has an MA in creative writing from the University of East Anglia, in addition to degrees in English and Shakespeare studies, and recently received his PhD. His first novel, The Hollow Man, launched the Detective Nick Belsey series. He also reviews for the Times Literary Supplement. He lives in London.

“Debut author Harris maintains the tension and suspense from the first sentence to the last. His antihero is engaging, and readers will be rooting for him all the way to the final plot twist.” — Library Journal

“Searing. . . . Readers should be prepared for a mind-bending resolution that hurtles down as remorselessly as an avalanche.” — Publishers Weekly (starred review)

“The narrative is buoyed by good writing and piercing insights. . . . And is our heel-hero really a study in conflict or a have-it-both-ways fraud, true blue under a raffish surface? That’s the real puzzle, and one thoughtful readers will relish.” — Booklist