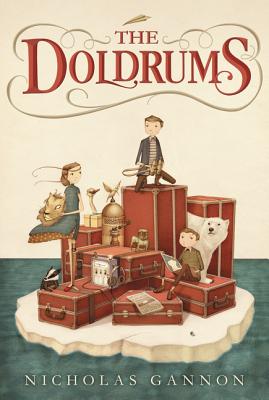 By Nicholas Gannon
$17.99
It's Complicated--Contact Us for More Information

Trapped at home with his over-protective parents, Archer comes up with a scheme to go search for his grandparents, who disappeared in the Antarctic years ago. A classic story of friendship, mystery and bears, with beautiful illustrations by the author.

“A dreamy charmer of a book, full of clever wordplay that practically demands it be read out loud.”—New York Times

Have you ever wanted to hold a little piece of the impossible? The Doldrums is an extraordinary debut about friendship, imagination, and the yearning for adventure from author-artist Nicholas Gannon. With the hardcover edition lavishly illustrated in full color, The Doldrums is a modern classic in the making, for readers of inventive and timeless authors such as Brian Selznick and Lemony Snicket.

Archer B. Helmsley wants an adventure. No, he needs an adventure. His grandparents were famous explorers . . . until they got stuck on an iceberg. Now Archer’s mother barely lets him out of the house. As if that would stop a true Helmsley. Archer enlists Adelaide—the girl who, according to rumor, lost her leg to a crocodile—and Oliver—the boy next door—to help him rescue his grandparents. The Doldrums whisks us off on an adventure full of sly humor, incredible detail, and enormous heart.

With approximately twenty pieces of breathtaking full-color artwork, as well as black-and-white spot illustrations, and gorgeous, literary writing, Nicholas Gannon proves himself to be a distinctive new voice with his middle grade debut. Be in it for the limitless imagination. For the characters who capture your heart. For the rich world you’ll want to settle into. But most of all, be in it for the friendship. That, after all, is the true adventure.

Nicholas Gannon studied art and design and held a number of odd jobs before becoming a full-time author and illustrator. He has lived in Tennessee, Minnesota, and upstate New York. He now resides in Brooklyn, and he can sometimes be found eavesdropping on curious conversations at the Explorers Club. www.nicholasjgannon.com

“A dreamy charmer of a book, full of clever wordplay that practically demands it be read out loud.” — New York Times Book Review

The Doldrums is delightful! What a wonderful ride of a book! — Jennifer L. Holm, NY TIMES-bestselling author of The Fourteenth Goldfish

“Newcomer Gannon reveals himself as a skilled storyteller, both in his writing and artwork… It’s a tender tale of friendship, untapped courage, and accidental adventure, filled with the spirit of exploration.” — Publishers Weekly (starred review)

“The art throughout is stunning, moves the story forward, and creates a beautiful package…This whimsical coming-of-age story has a touch of mystery that will endear it to fans of Roald Dahl.” — School Library Journal

“[A] warm and witty debut…What begins as an adventure…turns out to be, at its heart, a tale of true friendship. Each [friend] breaks out of his or her own prison in unusual ways so that together the trio accomplishes far more than they could have on their own.” — Shelf Awareness

“You’ll laugh, you’ll cry, you’ll root for them, and when it’s over, you’ll want to turn the page back to the beginning and read it all over again. This is one of those books that everyone should read.” — Candice Huber, Tubby & Coo’s Mid City Book Shop, New Orleans, LA