The Poetics of Space (Paperback) 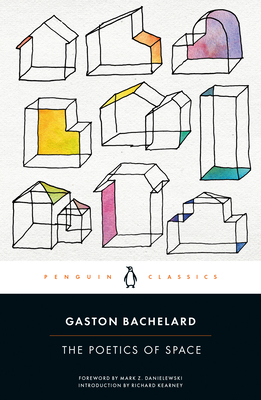 Since its initial publication in 1958, The Poetics of Space has been a muse to philosophers, architects, writers, psychologists, critics, and readers alike. The rare work of irresistibly inviting philosophy, Bachelard’s seminal work brims with quiet revelations and stirring, mysterious imagery. This lyrical journey takes as its premise the emergence of the poetic image and finds an ideal metaphor in the intimate spaces of our homes. Guiding us through a stream of meditations on poetry, art, and the blooming of consciousness itself, Bachelard examines the domestic places that shape and hold our dreams and memories. Houses and rooms; cellars and attics; drawers, chests, and wardrobes; nests and shells; nooks and corners: No space is too vast or too small to be filled by our thoughts and our reveries. In Bachelard’s enchanting spaces, “We are never real historians, but always near poets, and our emotion is perhaps nothing but an expression of a poetry that was lost.”

This new edition features a foreword by Mark Z. Danielewski, whose bestselling novel House of Leaves drew inspiration from Bachelard’s writings, and an introduction by internationally renowned philosopher Richard Kearney who explains the book’s enduring importance and its role within Bachelard’s remarkable career.

For more than sixty-five years, Penguin has been the leading publisher of classic literature in the English-speaking world. With more than 1,500 titles, Penguin Classics represents a global bookshelf of the best works throughout history and across genres and disciplines. Readers trust the series to provide authoritative texts enhanced by introductions and notes by distinguished scholars and contemporary authors, as well as up-to-date translations by award-winning translators.

Gaston Bachelard (1884–1962) was the son of shoemakers who went on to have an illustrious academic career. He is credited with a renewal of emphasis on symbol and poetic meaning in architecture.

Mark Z. Danielewski is the bestselling author of several novels, including House of Leaves and the National Book Award Finalist Only Revolutions. He lives in New York City.

Richard Kearney is an author, a philosopher, and the Charles B. Seelig Chair of Philosophy at Boston College.

"[Bachelard] is neither a self-confessed and tortured atheist like Satre, nor, like Chardin, a heretic combining a belief in God with a proficiency in modern science. But, within the French context, he is almost as important as they are because he has a pseudo-religious force, without taking a stand on religion. To define him as briefly as possible – he is a philosopher, with a professional training in the sciences, who devoted most of the second phase of his career to promoting that aspect of human nature which often seems most inimical to science: the poetic imagination ..."
– J.G. Weightman, The New York Times Review of Books

"Any hope or fear that the experimental novel was an aberration of the twentieth century is dashed by the appearance of Mark Z. Danielewski's House of Leaves, the first major experimental novel of the new millennium. And it's a monster. Dazzling."
-Washington Post Book World