1775: A Good Year for Revolution (Paperback) 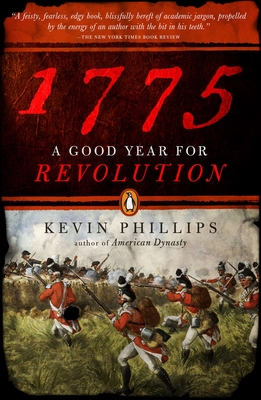 How and why did the farmers, hill people, city lawyers, wealthy plantation owners and other completely disparate peoples - some  of them extremely contrary - join the American revolution?  It's a complex, fascinating story, way beyond the handy school version, and Phillips has done a superb job of laying it all out.  A valuable addition to the ongoing historical record.

In this major new work, iconoclastic historian and political chronicler Kevin Phillips upends the conventional reading of the American Revolution by debunking the myth that 1776 was the struggle’s watershed year. Focusing on the great battles and events of 1775, Phillips surveys the political climate, economic structures, and military preparations of the crucial year that was the harbinger of revolution, tackling the eighteenth century with the same skill and perception he has shown in analyzing contemporary politics and economics. The result is a dramatic account brimming with original insights about the country we eventually became.

Kevin Phillips has been a political and an economic commentator for four decades. 1775 is his fifteenth book. He lives in Connecticut.

"A feisty, fearless, edgy book, blissfully bereft of academic jargon, propelled by the energy of an author with the bit in his teeth.”--The New York Times Book Review

“In his amassing of mountains of facts from numerous monographs, Phillips has tried to do what most academic historians these days have not been much interested in doing—bring together all the meticulous research that has been going on for decades and turn it into a comprehensive and readable book designed for general readers. Much of what Phillips has written is clear and free of jargon. His assessments of the various military situations, especially those faced by the British, are always realistically based, and his judgments of what was possible and what was not possible for the British to do are always sound.”--The New York Review of Books

"A solid, well-argued, and informative re-examination of our beginnings as a nation-state."--Booklist