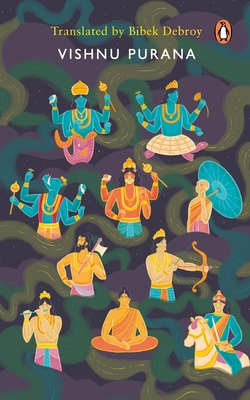 By Bibek Debroy
Not Available
Available to Order from Supplier: Arrives at Store in a Week(ish)

LORD VISHNU AND THE CREATION

The Vishnu Purana is part of a series of eighteen sacred Hindu texts known collectively as the Puranas. It occupies a prominent position among the ancient Vaishnava Puranas which recount tales of creation and the many incarnations of Lord Vishnu. It describes the four classes of society, the four stages of life, and key astronomical concepts related to Hinduism.
Brimming with insight and told with clarity, this translation of the Vishnu Purana by Bibek Debroy presents readers with an opportunity to truly understand the classical Indian mythic texts. Debroy has previously translated the Bhagavata Purana, the Markandeya Purana, and the Brahma Purana.

Bibek Debroy is a renowned economist, scholar and translator. He has worked in universities, research institutes, industry and for the government. He has widely published books, papers and articles on economics. As a translator, he is best known for his magnificent rendition of the Mahabharata in ten volumes as well as the three-volume Valmiki Ramayana-both of which have been published to wide acclaim by Penguin Classics. He is also the author of Sarama and Her Children, which splices his interest in Hinduism with his love for dogs. Most recently, he translated the Bhagavata Purana and the Markandeya Purana for Penguin Classics.