Command: The Politics of Military Operations from Korea to Ukraine (Hardcover) 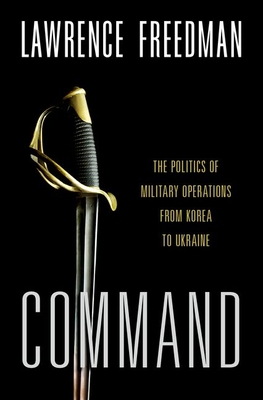 Using examples from a wide variety of conflicts, Lawrence Freedman shows that successful military command depends on the ability not only to use armed forces effectively but also to understand the political context in which they are operating. Command in war is about forging effective strategies and implementing them, making sure that orders are appropriate, well-communicated, and then obeyed. But it is also an intensely political process. This is largely because how wars are fought depends to a large extent on how their aims are set. It is also because commanders in one realm must possess the ability to work with other command structures, including those of other branches of the armed forces and allies. In Command, Lawrence Freedman explores the importance of political as well as operational considerations in command with a series of eleven vivid case studies, all taken from the period after 1945. Over this period, the risks of nuclear escalation led to a shift away from great power confrontations and towards civil wars, and advances in communication technologies made it easier for higher-level commanders to direct their subordinates. Freedman covers defeats as well as victories. Pakistani generals tried to avoid surrender as they were losing the eastern part of their country to India in 1971. Iraq's Saddam Hussein turned his defeats into triumphant narratives of victory. Osama bin Laden escaped the Americans in Afghanistan in 2001. The UK struggled as a junior partner to the US in Iraq after 2003. We come across insubordinate generals, such as Israel's Arik Sharon, and those in the French army in Algeria, so frustrated with their political leadership that they twice tried to change it. At the other end of the scale, Che Guevara in Congo in 1966 and Igor Girkin in Ukraine in 2014 both tried to spark local wars to suit their grandiose objectives. Freedman ends the book with a meditation on the future of command in a world that is becoming increasingly reliant on technologies like artificial intelligence. A wide-ranging and insightful history of the changing nature of command in the postwar era, this will stand as a definitive account of a foundational concept in both military affairs and politics.

Lawrence Freedman was Professor of War Studies at King's College London from 1982 to 2014 and Vice-Principal of the College from 2002 to 2013. He was the Official Historian of the Falklands Campaign and a member of the UK Inquiry into the Iraq War. He is the author of several books, including Strategy: A History (Oxford).