Floating Gold: A Natural (and Unnatural) History of Ambergris (Hardcover) 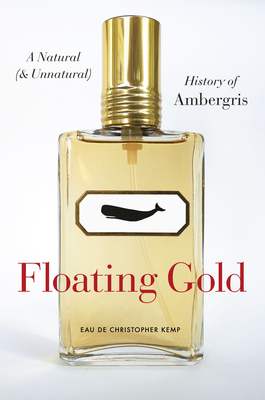 By Christopher Kemp
$22.50
It's Complicated--Contact Us for More Information

Ambergris, a biliary secretion of sperm whales, is one of the most expensive substances on earth.   And though it has been used as everything from a perfume fixative to a seasoning, we still know remarkably little about it.  Kemp's quirky little book bobs through an ocean of information about this fragrant flotsam, picking over New Zealand beaches, whaling histories, seventeenth century newspapers, perfumer's manuals, and the latest marine research in order to bring us the weird, wandering story of this strange commodity.

— From Floating Gold: A Natura History of Ambergris

A fascinating natural history of an incredibly curious substance.

“Preternaturally hardened whale dung” is not the first image that comes to mind when we think of perfume, otherwise a symbol of glamour and allure. But the key ingredient that makes the sophisticated scent linger on the skin is precisely this bizarre digestive by-product—ambergris. Despite being one of the world’s most expensive substances (its value is nearly that of gold and has at times in history been triple it), ambergris is also one of the world’s least known. But with this unusual and highly alluring book, Christopher Kemp promises to change that by uncovering the unique history of ambergris.

A rare secretion produced only by sperm whales, which have a fondness for squid but an inability to digest their beaks, ambergris is expelled at sea and floats on ocean currents for years, slowly transforming, before it sometimes washes ashore looking like a nondescript waxy pebble. It can appear almost anywhere but is found so rarely, it might as well appear nowhere. Kemp’s journey begins with an encounter on a New Zealand beach with a giant lump of faux ambergris—determined after much excitement to nothing more exotic than lard—that inspires a comprehensive quest to seek out ambergris and its story. He takes us from the wild, rocky New Zealand coastline to Stewart Island, a remote, windswept island in the southern seas, to Boston and Cape Cod, and back again. Along the way, he tracks down the secretive collectors and traders who populate the clandestine modern-day ambergris trade.

Floating Gold is an entertaining and lively history that covers not only these precious gray lumps and those who covet them, but presents a highly informative account of the natural history of whales, squid, ocean ecology, and even a history of the perfume industry. Kemp’s obsessive curiosity is infectious, and eager readers will feel as though they have stumbled upon a precious bounty of this intriguing substance.

Christopher Kemp is a scientist living in Grand Rapids, Michigan. He is the author of Dark and Magical Places: The Neuroscience of Navigation.

“Christopher Kemp weaves fascinating facts about sperm whales (bulls weigh 50 tons and consume up to a ton of food a day), ambergris’s central role in creating the world’s perfumes, and personal reflections about his quest for ambergris into a pleasing, easy-flowing story. Much of the book recounts spectacular past and recent finds of ambergris and the secretive individuals who search for the elusive substance. They’re so secretive that one collector reportedly walked backward to ‘disguise the direction he was traveling.’ And Kemp’s descriptions of the close-mouthed ambergris traders provide a satisfying glimpse into a little-known parallel universe in which readers vicariously share the thrill of the hunt and dreams of fortune that drive the ambergris obsessed.”
— Publishers Weekly

“Christopher Kemp holds no world records (well, except hands-down for the best book ever written about ambergris), but after a childhood in Birmingham he found himself at the University of Otago, on the South Island of New Zealand, where he began his obsessive quest for ambergris. . . .You probably haven’t spent many sleepless nights wondering where ambergris comes from or what it smells like, but I know that Floating Gold will enchant and surprise you with its answers to these and countless other questions, and you will now be able to dazzle your uninformed friends who otherwise would know nothing about how faecal impactions and French perfume go together.”

“Christpher Kemp’s engrossing study takes us through history, tales of present-day hunters and cetacean science, poking its nose into the perfume industry on the way.”

"Ambergris is the kind of singularity—in nature and in human affairs—that cries out for investigation by an obsessed scientist who can write well. In Christopher Kemp, the world’s most lusted-after poop has found its man."

“Carefully and thoughtfully written, Christopher Kemp's Floating Gold can take a place on the bookshelf among my favorite natural histories. Those peer at their subject from many angles, combining facts with observations of the places and people that have become part of its history. Kemp (a molecular biologist) tells stories about ambergris: fragrant stuff, produced in the gut of the sperm whale, that for centuries has been both a prized commodity and a compellingly mysterious substance. . . . Floating Gold offers an enticing initiation into the shadowy and intriguing history of ambergris.”

“It’s hard not to fall in love with ambergris, or the concept of ambergris as the unknowable embodiment of the sea, along with Christopher Kemp.”

“Kemp manages to infuse each windy walk on the shore with an air of true mystery. Each foray seems as if it could be the right one, and I found myself peeking at the end to find out whether or not he succeeds.”

“The history that Kemp, a molecular biologist and journalist, presents here illustrates the process of how an understanding of natural history on any topic typically matures from its nascent, speculative beginnings. The relaxed writing style is characterized by a justly parsimonious ability to describe locations, objects, and people. Clearly, the author's observational skills are well honed."

“In this wonderful—and surprisingly gripping—book, Christopher Kemp examines the curious history of one of the world's rarest and most magical substances. This is natural history done well.”
— Joshua Foer, author of Moonwalking with Einstein

“Following on the scent of what must be the strangest known natural substance, Christopher Kemp’s adventure-filled journey into the often-bizarre world of ambergris takes us from whale innards to remote islands. A compelling narrative, a detective story, and a wonderful window into history and obsession, Floating Gold has struck a rich oceanic seam. With its mixture of scientific rigor, evocative travelogue, and eccentric personalities, Kemp’s book finally uncovers the secrets of this elusive and extraordinary stuff. His book lingers like the smell of ambergris itself.”

— Philip Hoare, author of The Whale

“Christopher Kemp’s delightful pursuit of all things ambergris has resulted in a wonderful and engagingly personal book on one of the world’s most mysterious and alluring substances. Floating Gold is a fascinating tale of obsession, the limits of science, avarice, suspicion, secrecy, and the desire to create the perfect perfume. It’s a pleasure to read.”
— Eric Jay Dolin, author of Leviathan: A History of Whaling in America

“Occupying a near-mythical niche somewhere between truffles and unicorn’s horn, ambergris is one of the rarest, most valuable substances in nature. It is also one of the most poorly understood—until now. With Floating Gold, Kemp has assembled the first comprehensive picture of a unique substance—an essence, really—that has inspired obsession and jealous secrecy for centuries and that, to this day, remains as precious as gold. With humor, insight, and the dogged determination of a Victorian scientist, Kemp takes us around the world and into the arcane and obsessive demimonde of ambergris seekers, traders, and high-end parfumiers. In so doing, he illuminates a world previously known to only a handful of people.”
— John Vaillant, author of The Tiger: A True Story of Vengeance and Survival

“Ambergris! Perhaps nature’s strangest and rarest gift—one could walk the shores for a lifetime and come up empty-handed. Christopher Kemp’s lovely quest tale put me in mind of an afternoon, several years ago, when I opened a dusty letter in the archive of an old whale scientist: suddenly the room burst with the smell of violets, musk, and fresh-hewn wood. To the sheet was taped a little dab of greasy gum, with a note reading, ‘Could this be it?’ Indeed it was! Would that a little piece of the magic could be tipped inside every copy of Floating Gold. Read it, for it’s as close as one can get without the stuff itself.”
— D. Graham Burnett, author of The Sounding of the Whale: Science and Cetaceans in