Religion and Public Memory: A Cultural History of Saint Namdev in India (Hardcover) 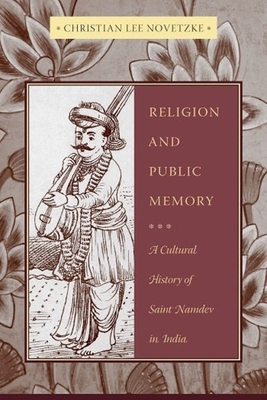 By Christian Lee Novetzke
Not Available

Namdev is a central figure in the cultural history of India, especially within the field of bhakti, a devotional practice that has created publics of memory for over eight centuries. Born in the Marathi-speaking region of the Deccan in the late thirteenth century, Namdev is remembered as a simple, low-caste Hindu tailor whose innovative performances of devotional songs spread his fame widely. He is central to many religious traditions within Hinduism, as well as to Sikhism, and he is a key early literary figure in Maharashtra, northern India, and Punjab. In the modern period, Namdev appears throughout the public spheres of Marathi and Hindi and in India at large, where his identity fluctuates between regional associations and a quiet, pan-Indian, nationalist-secularist profile that champions the poor, oppressed, marginalized, and low caste. Christian Lee Novetzke considers the way social memory coheres around the figure of Namdev from the sixteenth century to the present, examining the practices that situate Namdev's memory in multiple historical publics. Focusing primarily on Maharashtra and drawing on ethnographies of devotional performance, archival materials, scholarly historiography, and popular media, especially film, Novetzke vividly illustrates how religious communities in India preserve their pasts and, in turn, create their own historical narratives.

Christian Lee Novetzke is assistant professor at the University of Washington's Jackson School of International Studies in the South Asia Program and Comparative Religion Program.