The Quotidian Revolution: Vernacularization, Religion, and the Premodern Public Sphere in India (Hardcover) 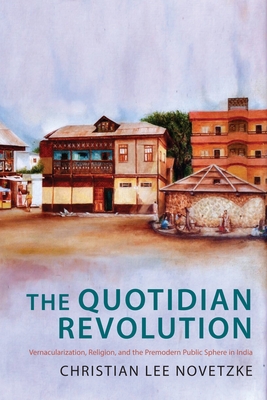 By Christian Lee Novetzke
Not Available

In thirteenth-century Maharashtra, a new vernacular literature emerged to challenge the hegemony of Sanskrit, a language largely restricted to men of high caste. In a vivid and accessible idiom, this new Marathi literature inaugurated a public debate over the ethics of social difference grounded in the idiom of everyday life. The arguments of vernacular intellectuals pushed the question of social inclusion into ever-wider social realms, spearheading the development of a nascent premodern public sphere that valorized the quotidian world in sociopolitical terms. The Quotidian Revolution examines this pivotal moment of vernacularization in Indian literature, religion, and public life by investigating courtly donative Marathi inscriptions alongside the first extant texts of Marathi literature: the Lilacaritra (1278) and the J anesvari (1290). Novetzke revisits the influence of Chakradhar (c. 1194), the founder of the Mahanubhav religion, and Jnandev (c. 1271), who became a major figure of the Varkari religion, to observe how these avant-garde and worldly elites pursued a radical intervention into the social questions and ethics of the age. Drawing on political anthropology and contemporary theories of social justice, religion, and the public sphere, The Quotidian Revolution explores the specific circumstances of this new discourse oriented around everyday life and its lasting legacy: widening the space of public debate in a way that presages key aspects of Indian modernity and democracy.

Christian Lee Novetzke is professor of religious studies, South Asia studies, and global studies at the Jackson School of International Studies at the University of Washington. He is the author of Religion and Public Memory: A Cultural History of Saint Namdev in India (Columbia, 2008) and coauthor, with William Elison and Andy Rotman, of Amar Akbar Anthony: Bollywood, Brotherhood, and the Nation (2016).