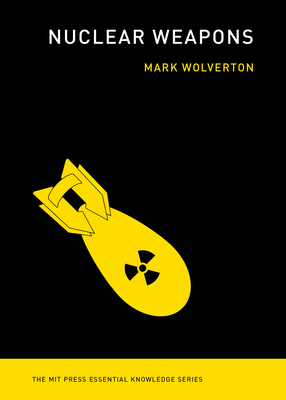 A primer on nuclear weapons, from the science of fission and fusion to the pursuit of mutual assured destruction, the SALT treaties, and the Bomb in pop culture.

Although the world’s attention has shifted to drone-controlled bombing and cyberwarfare, the threat of nuclear war still exists. There are now fourteen thousand nuclear weapons in the hands of the nine declared nuclear powers. Even though the world survived the Cold War, we need to understand what it means to live with nuclear weapons. In this volume in the MIT Press Essential Knowledge series, Mark Wolverton offers a primer on nuclear weapons, from the science of fission and fusion to the pursuit of mutual assured destruction, the SALT and START agreements, and the Bomb in pop culture.

Wolverton explains the basic scientific facts, offers historical perspective, and provides a nuanced view of the unique political, social, and moral dilemmas posed by nuclear weapons. He describes the birth of the Bomb in 1945 and its use against the Japanese cities of Hiroshima and Nagasaki; explains how a nuclear bomb works; recounts episodes when the world came close to waging nuclear war, including the Cuban missile crisis in 1962; discusses nuclear policy and nuclear treaties; and traces the influence of such films as On the Beach, Dr. Strangelove, and The Day After.

Mark Wolverton is a science writer and the author of Burning the Sky: Operation Argus and the Untold Story of the Cold War Nuclear Tests in Outer Space, A Life in Twilight: The Final Years of J. Robert Oppenheimer, and The Depths of Space: The Story of the Pioneer Planetary Probes. His journalism has appeared in WIRED, Nature, Undark, Scientific American, Air & Space Smithsonian, and other publications.