Founding Finance: How Debt, Speculation, Foreclosures, Protests, and Crackdowns Made Us a Nation (Discovering America) (Paperback) 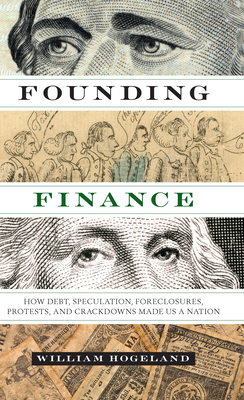 Recent movements such as the Tea Party and anti-tax “constitutional conservatism” lay claim to the finance and taxation ideas of America’s founders, but how much do we really know about the dramatic clashes over finance and economics that marked the founding of America? Dissenting from both right-wing claims and certain liberal preconceptions, Founding Finance brings to life the violent conflicts over economics, class, and finance that played directly, and in many ways ironically, into the hardball politics of forming the nation and ratifying the Constitution—conflicts that still continue to affect our politics, legislation, and debate today.

Mixing lively narrative with fresh views of America’s founders, William Hogeland offers a new perspective on America’s economic infancy: foreclosure crises that make our current one look mild; investment bubbles in land and securities that drove rich men to high-risk borrowing and mad displays of ostentation before dropping them into debtors’ prisons; depressions longer and deeper than the great one of the twentieth century; crony mercantilism, war profiteering, and government corruption that undermine any nostalgia for a virtuous early republic; and predatory lending of scarce cash at exorbitant, unregulated rates, which forced people into bankruptcy, landlessness, and working in the factories and on the commercial farms of their creditors. This story exposes and corrects a perpetual historical denial—by movements across the political spectrum—of America’s all-important founding economic clashes, a denial that weakens and cheapens public discourse on American finance just when we need it most.

William Hogeland writes and speaks on startling connections between American history and today’s political and cultural struggles. He is the author of the critically acclaimed narrative histories Declaration and The Whiskey Rebellion, as well as a collection of essays, Inventing American History. His articles have appeared in the New York Times, Atlantic, American History Magazine, Boston Review, Salon, Huffington Post, and elsewhere. He has also appeared on CBS’s Good Morning, America, PBS’s History Detectives, and C-SPAN’s Book TV.