Arms and Influence: With a New Preface and Afterword (The Henry L. Stimson Lectures Series) (Paperback) 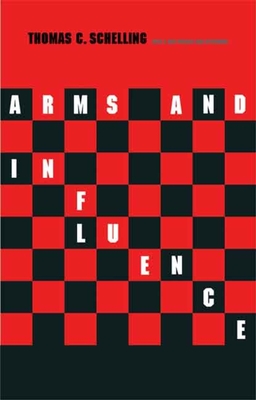 By Thomas C. Schelling
Not Available
Out of Print

Traditionally, Americans have viewed war as an alternative to diplomacy, and military strategy as the science of victory.  Today, however, in our world of nuclear weapons, military power is not so much exercised  as threatened.  It is, Mr. Schelling says, bargaining power, and the exploitation of this power, for good or evil, to preserve peace or to threaten war, is diplomacy—the diplomacy of violence.  The author concentrates in this book on the way in which military capabilities—real or imagined—are used, skillfully or clumsily, as bargaining power.  He sees the steps taken by the U.S. during the Berlin and Cuban crises as not merely preparations for engagement, but as signals to an enemy, with reports from the adversary's own military intelligence as our most important diplomatic communications.  Even the bombing of North Vietnam, Mr. Schelling points out, is as much coercive as tactical, aimed at decisions as much as bridges.  He carries forward the analysis so brilliantly begun in his earlier The Strategy of Conflict (1960) and Strategy and Arms Control (with Morton Halperin, 1961), and makes a significant contribution to the growing literature on modern war and diplomacy. Stimson Lectures.Mr. Schelling is professor of economics at Harvard and acting director of Harvard's Center for International Affairs. "An exemplary text on the interplay of national purpose and military force."—Book Week. "A grim but carefully reasoned and coldly analytical book. . . . One of the most frightening previews which this reviewer has ever seen of the roads that lie just ahead in warfare."—Los Angeles Times. "A brilliant and hardheaded book. It will frighten those who prefer not to dwell on the unthinkable and infuriate those who have taken refuge in the stereotypes and moral attitudinizing."—New York Times Book Review.

Thomas C. Schelling is Distinguished University Professor, Department of Economics and School of Public Affairs, University of Maryland and Lucius N. Littauer Professor of Political Economy, Emeritus, Harvard University. He is co-recipient of the 2005 Nobel Prize in Economics.

"This is a brilliant and hardheaded book. It will frighten those who prefer not to dwell on the unthinkable and infuriate those who have taken refuge in stereotypes and moral attitudinizing."—Gordon A. Craig, New York Times Book Review


"An exemplary text on the interplay of national purpose and military force."—Eric Larrabee, Book Week


"Well worth reading and there will be few who do so that do not find an idea or line of inquiry emerging in their own later thinking that owes its inspiration to Professor Schelling's lively analysis."—American Political Science Review

"Of great value especially to people who are relative newcomers to the field . . . it has, like everything of Schelling's, some quite novel and original ideas."—Bernard Brodie

"Tom Schelling is the most significant nuclear strategist of the past half-century. Arms and Influence was essential reading for any serious student of the subject throughout the Cold War. With his new preface and foreword, Schelling demonstrates that in a world facing the threat of nuclear terrorism and belligerent states such as North Korea and Iran, his ideas and examples are vital if we are to continue 'the tradition of non-use' of these ultimate weapons of devastation."—Michael Nacht, University of California, Berkeley