A Restatement of Religion: Swami Vivekananda and the Making of Hindu Nationalism (Hardcover) 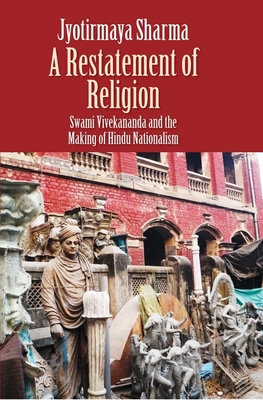 By Jyotirmaya Sharma
Not Available

In this third installment of his comprehensive history of “India’s religion” and reappraisal of Hindu identity, Professor Jyotirmaya Sharma offers an engaging portrait of Swami Vivekananda and his relationship with his guru, the legendary Ramakrishna. Sharma’s work focuses on Vivekananda’s reinterpretation and formulation of diverse Indian spiritual and mystical traditions and practices as “Hinduism” and how it served to create, distort, and justify a national self-image. The author examines questions of caste and the primacy of the West in Vivekananda’s vision, as well as the systematic marginalization of alternate religions and heterodox beliefs. In doing so, Professor Sharma provides readers with an incisive entryway into nineteenth- and twentieth-century Indian history and the rise of Hindutva, the Hindu nationalist movement. Sharma’s illuminating narrative is an excellent reexamination of one of India’s most controversial religious figures and a fascinating study of the symbiosis of Indian history, religion, politics, and national identity. It is an essential story for anyone interested in the evolution of one of the world’s great religions and its role in shaping contemporary India.

Jyotirmaya Sharma is professor of political science at the University of Hyderabad, India. He was a Fellow of the Swedish Collegium for Advanced Study in Uppsala, Sweden and his publications include Hindutva: Exploring the Idea of Hindu Nationalism and Terrifying Vision: M.S. Golwalkar, the RSS and India.


“A book of substance and importance, written in an engaging, straightforward style, illuminated by flashes of wit and, of course, by the author's deep knowledge of the cultural background and historical record.  Sharma’s scholarship is sound, well-informed, and well-presented.  His book will become the classic statement about Vivekananda in this generation"—David Shulman, Hebrew University
— David Shulman

“An outstanding study of how and why Vivekananda re-defined Hinduism, and of how and why this redefinition became so influential.  This is an invaluable work for anyone interested not only in the recent religious history of South Asia but also in the re-definition of religions in general over the past two centuries.”—Michael Puett, Harvard University
— Michael Puett

“This forcefully and lucidly argued book is the best brief and yet nuanced introduction to Ramakrishna’s thought that I know of, condensing and accessibly bringing together much recent scholarship. This will be an influential and important book.”—Ajay Skaria, University of Minnesota
— Ajay Skaria