We Play a Game (Yale Series of Younger Poets #112) (Paperback) 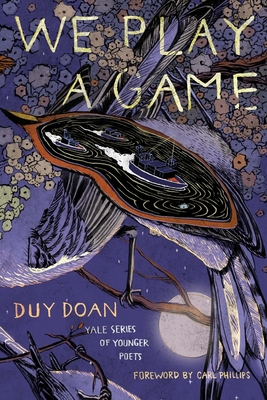 By Duy Doan, Carl Phillips (Foreword by)
$20.00
It's Complicated--Contact Us for More Information

We Play A Game is intimate, poignant, playful, confessional, hilarious, strange, searing, and clever -- often all in the same poem.  Duy Doan writes about being Vietnamese-American, about the Tootsie Pop owl and soccer, about lovers and prayer, language and family.  Winner of the Yale Prize (2017), this book was recently named a Lambda finalist in the bisexual poetry category.

— From We Play a Game

Duy Doan’s striking debut reveals the wide resonance of the collection’s unassuming title, in poems that explore—now with abundant humor, now with a deeply felt reserve—the ambiguities and tensions that mark our effort to know our histories, our loved ones, and ourselves. These are poems that draw from Doan’s experience as a Vietnamese-American while at the same time making a case for—and masterfully playing with—the fluidity of identity, history, and language. Nothing is alien to these poems: the Saigon of a mother’s dirge, the footballer Zinedine Zidane, an owl that “talks to his other self in the well”—all have a place in Doan’s far-reaching and intimately human art.

Duy Doan is a Kundiman Fellow whose poetry has appeared in Poetry, Slate, TriQuarterly, and elsewhere. He received an MFA in Poetry from Boston University. Carl Phillips is the award-winning author of twelve books of poetry. His most recent work is the poetry collection Reconnaissance. This is his seventh year as judge of the Yale Series of Younger Poets.

“Refreshingly unshowy, Doan’s collection is not an obvious choice for a big prize, but it reveals itself to be a deserving one.”—Publishers Weekly