Surviving Genocide: Native Nations and the United States from the American Revolution to Bleeding Kansas (Paperback) 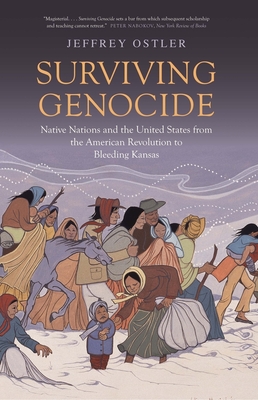 The first part of a sweeping two-volume history of the devastation brought to bear on Indian nations by U.S. expansion

"An elegant, organized narrative of the United States' dispossession of Native lands east of the Mississippi. . . . A remarkable book in its breadth and scope."—Ashley Riley Sousa, Canadian Journal of History

In this book, the first part of a sweeping two-volume history, Jeffrey Ostler investigates how American democracy relied on Indian dispossession and the federally sanctioned use of force to remove or slaughter Indians in the way of U.S. expansion. He charts the losses that Indians suffered from relentless violence and upheaval and the attendant effects of disease, deprivation, and exposure. This volume centers on the eastern United States from the 1750s to the start of the Civil War.

An authoritative contribution to the history of the United States’ violent path toward building a continental empire, this ambitious and well-researched book deepens our understanding of the seizure of Indigenous lands, including the use of treaties to create the appearance of Native consent to dispossession. Ostler also documents the resilience of Native people, showing how they survived genocide by creating alliances, defending their towns, and rebuilding their communities.

Jeffrey Ostler is Beekman Professor of Northwest and Pacific History at the University of Oregon.

“An excellent first installment of what will be a two-part history.”—Rebecca Onion, Slate

"In Surviving Genocide, historian Jeffrey Ostler. . .has synthesized extensive historical scholarship to produce an elegant, organized narrative of the United States' dispossession of Native lands east of the Mississippi. Surviving Genocide is a remarkable book in its breadth and scope."—Ashley Riley Sousa, Canadian Journal of History

“[A] comprehensive and impressively thorough book. . . . The book deserves a wide readership, and it is ideal for both undergraduate and graduate courses in U.S. history.”—Julius Wilm, Journal of Southern History

“A valuable synthesis of American settler colonialism and Indigenous responses to it. Its uncompromising as­sessment of genocide is a timely and important intervention. . . . . Whether the debate unfolds in journals, classrooms, or newspaper columns, Surviving Genocide will provide mandatory reading for all participants in this conversation.”—Jane Dinwoodie, Civil War History

“This work will likely transform the way scholars evaluate the motivations behind the United States’ treatment of its Indigenous populations.”—Tim Alan Garrison, Oregon Historical Quarterly

“Ostler’s exhaustively researched and insightful book left me with new understandings of the past and also with new ways of thinking about the Native literatures of this period.”— Paul Conrad, Early American Literature

"Jeffrey Ostler's Surviving Genocide covers a full century and a huge swath of territory but is never less than comprehensive. This is benchmark history at its best."—John Mack Faragher, Yale University

"Surviving Genocide provides a panoramic survey of American-Indian relations and takes a hard look at U.S. policies that were predicated, one way or another, on the removal of Native people; at the same time, it offers important testimony on the resilience of Native people who refused to disappear."—Colin G. Calloway, author of The Indian World of George Washington

“Stunning in its depth of research and scope of learning, Surviving Genocide brings a new level of sophistication to the study of the United States'  'Indian wars,' revealing the genocidal impulse at the core of the conflicts as well as the Native ingenuity that prevented an even more profound loss of life and land.”—Karl Jacoby, author of Shadows at Dawn: A Borderlands Massacre and the Violence of History

“A landmark book essential to understanding American history, Surviving Genocide is an act of courage. Ostler’s brilliant concept of reconstructing 'an Indigenous consciousness of genocide' is significant for its insight into how American Indians understood, discussed, and resisted genocidal threats to their families, communities, and nations. His modern vocabulary of 'atrocities' and 'killing fields' is not for political effect but appropriate to the brutal reality of Indian policy in American history.”—Brenda Child, Northrop Professor of American Studies, University of Minnesota