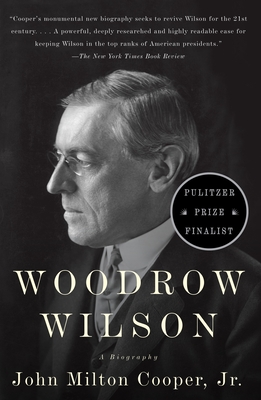 By John Milton Cooper, Jr.
$22.00
It's Complicated--Contact Us for More Information

The first major biography of America’s twenty-eighth president in nearly two decades, from one of America’s foremost Woodrow Wilson scholars.

A Democrat who reclaimed the White House after sixteen years of Republican administrations, Wilson was a transformative president—he helped create the regulatory bodies and legislation that prefigured FDR’s New Deal and would prove central to governance through the early twenty-first century, including the Federal Reserve system and the Clayton Antitrust Act; he guided the nation through World War I; and, although his advocacy in favor of joining the League of Nations proved unsuccessful, he nonetheless established a new way of thinking about international relations that would carry America into the United Nations era. Yet Wilson also steadfastly resisted progress for civil rights, while his attorney general launched an aggressive attack on civil liberties.

Even as he reminds us of the foundational scope of Wilson’s domestic policy achievements, John Milton Cooper, Jr., reshapes our understanding of the man himself: his Wilson is warm and gracious—not at all the dour puritan of popular imagination. As the president of Princeton, his encounters with the often rancorous battles of academe prepared him for state and national politics. Just two years after he was elected governor of New Jersey, Wilson, now a leader in the progressive movement, won the Democratic presidential nomination and went on to defeat Theodore Roosevelt and William Howard Taft in one of the twentieth century’s most memorable presidential elections. Ever the professor, Wilson relied on the strength of his intellectual convictions and the power of reason to win over the American people.

John Milton Cooper, Jr., gives us a vigorous, lasting record of Wilson’s life and achievements. This is a long overdue, revelatory portrait of one of our most important presidents—particularly resonant now, as another president seeks to change the way government relates to the people and regulates the economy.

John Milton Cooper, Jr., is professor of history at the University of Wisconsin. He is the author of Breaking the Heart of the World: Wilson and the Fight for the League of Nations and The Warrior and the Priest: Woodrow Wilson and Theodore Roosevelt, among other books. He was recently a fellow at the Woodrow Wilson International Center for Scholars in Washington, D.C. He lives in Madison, Wisconsin.

“Cooper’s much-anticipated biography finally gives Wilson his due. The preeminent living historian of Wilson and his era, Cooper has studied the man an his times for decades . . . he now presents us with his magnum opus. The book is deeply, indeed exhaustively researched, and beautifully, often movingly narrated. It is far and away the best biography of the 28th president we have, and as such it is unlikely to be surpassed.”  —Boston Globe

“Cooper’s monumental new biography seeks to revive Wilson for the 21st century—not simply to narrate a presidential life, but to explain why he deserves our national esteem….An admiring and engaging work of presidential revisionism. . . . A powerful, deeply researched and highly readable case for keeping Wilson in the top ranks of American presidents.” —The New York Times Book Review

“Wilson comes alive in Cooper’s insightful and important biography. . . . It’s easy to see why Wilson captures many imaginations. We still want to believe what Wilson believed: that there is a common right, that we can find it, and that it matters most of all.” —Newsweek

“Cooper clearly admires his subject but is not blind to his faults. His is a nuanced portrait of the 28th president. . . . It also offers lessons for another intellectual professor-turned-president, who combines principle with pragmatism. He, Wilson, and Teddy Roosevelt are the only presidents to receive a Nobel Peace Prize while still in office.” —Cleveland Plain Dealer

“A noted Woodrow Wilson expert comprehensively examines the life and career of America’s 28th president. . . . Cooper exhibits complete command of his materials, a sure knowledge of the man and a nuanced understanding of a presidency almost Shakespearean in its dimensions.”  —Kirkus (Starred review)

“[O]ur leading Wilson authority . . . offers a comprehensive, felicitously written biography aimed at scholars but accessible to general readers, too. . . . He admires Wilson for his faith, learning, eloquence, and executive skill while conceding that he had to learn foreign policy on the job—yet established America as an international player.” —Library Journal (Starred review)

“In this spellbinding new biography, sure to take its place as the definitive one volume life, John Milton Cooper rescues Woodrow Wilson from historical caricature. He gives us the Progressive champion whose New Freedom transformed the role of government and offered later presidents—FDR and LBJ come to mind—a textbook example of presidential persuasion and legislative mastery. Behind Wilsonian idealism is Wilson the idealist—a man of soaring vision and tragic blind spots, furtive charm and unbridled passions, global ambitions and unyielding enmities. Crafted with a scholarship and eloquence worthy of its subject, Cooper’s Wilson is intensely moving, sometimes infuriating, and surprisingly contemporary. Above all, it lives.” —Richard Norton Smith, author of Patriarch: George Washington and the New American Nation

“None of our most consequential presidents have been as elusive as Woodrow Wilson. But in this wise and often moving work, John Milton Cooper, Jr. takes his full measure—as scholar and orator, personality and politician, visionary and statesman. It is a triumph of American biography, both deeply learned and gracefully crafted.” —Michael Kazin, author of A Godly Hero: The Life of William Jennings Bryan

“John Cooper’s Wilson is the triumphant product of a dedicated life’s work. Cooper has earlier written, with insight and authority, The Warrior and the Priest, a comparison of T.R. and Wilson, and Breaking the Heart of the World, a study of the making and rejection of the Treaty of Versailles. In the process of preparing those absorbing works and going on to write this incomparable biography, Cooper has read everything significant that Wilson ever wrote, from love letters to political theory, and also read everything significant that has been written about Wilson. He has now utilized his unequalled learning in his interpretations and evaluations of Wilson’s life, the subject of this sprightly, authoritative, and eminently readable book.” —John Blum, author of V Was for Victory: Politics and American Culture During World War II

“A landmark work, the best one-volume biography ever written about the 28th president, and political history as its finest.  With great deftness, Cooper describes and evaluates Wilson’s personality and intellect, in ways that will surprise many readers. He thereby illuminates the idealism and tragedy, the insight and the blindness, of one of the monumental figures in the nation’s history.” —Sean Wilentz, author of The Rise of American Democracy: Jefferson to Lincoln

“John Milton Cooper has given us a rich and thoughtful portrait of a transformative, controversial and resonant president.  Americans who remember Woodrow Wilson as a dour scholar-president will find a vastly more complicated and fascinating man in the pages of Cooper's sweeping new book.” —Jon Meacham, Pulitzer Prize-winning author of American Lion

“There is no more accomplished Woodrow Wilson scholar than John Milton Cooper, and this magisterial, judicious, deeply researched book—the culmination of decades of study—shows the author at the zenith of his powers. Cooper’s book demonstrates Wilson’s importance to our own generation, and his powerful judgments will shape the way we view the 28th President for a very long time.” —Michael Beschloss, author of Presidential Courage

“Woodrow Wilson continues to intrigue—and divide—us. At once an idealist expressing the noblest of liberal sentiments and a racist, an intellectual and a skilled politician, a man capable of great kindness and great vindictiveness—John Milton Cooper's masterly biography describes him warts and all. A full and fascinating study of the man and his turbulent times.” —Margaret MacMillan, author of Paris 1919

“A riveting account of one of America’s most intellectually magnetic, yet also enigmatic, presidents. John Milton Cooper Jr. does a superb job of  portraying the aspirations of Wilson’s idealistic internationalism while at the same time detailing the realistic pitfalls that helped undermine it. Cooper has provided a fascinating read for those who want to understand a presidency that helped set the tone for U.S. foreign policy in the 20th Century.” —James A. Baker, III, 61st U.S. Secretary of State

“John Milton Cooper has written an important biography about a man who made—and continues to make—a large difference.  An enjoyable and enlightening read.” —George P. Shultz, former Secretary of State

“A rich and readable study by a leading historian who has made Wilson and his times his life work.  A fine combination of sound scholarship and compelling narrative.” —James MacGregor Burns, Pulitzer Prize-winning author of Roosevelt: Soldier of Freedom 1940–1945

“Of all the important presidents of the 20th century, Woodrow Wilson has always been the least-known and seemed the least-knowable. Now, John Milton Cooper, Jr., has written a crisp clear eyed account of the life of this extraordinary but deeply flawed leader who began his career as a dynamic far-seeing reformer and  ended it short-sighted and delusional. It is a Shakespearean story, beautifully and sensitively told by one of our finest historians.” —Geoffrey C. Ward, author of A First Class Temperament: The Emergence of Franklin Delano Roosevelt