The Zhivago Affair: The Kremlin, the CIA, and the Battle Over a Forbidden Book (Hardcover) 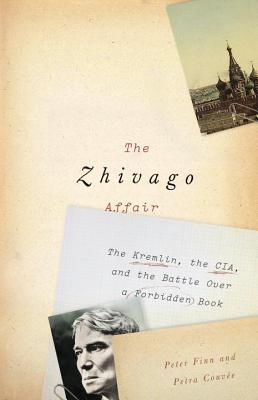 By Peter Finn, Petra Couvee
$26.95
It's Complicated--Contact Us for More Information

The Zhivago Affair brings to light the involvement of the CIA in the distribution of Pasternak’s epic novel in the USSR which had banned its publication, an involvement which would likely have profoundly disturbed Pasternak had he known about it. But this book tells us much more than just that episode of Doctor Zhivago’s history. It’s really a fuller biographical portrait of the Nobel Prize winning author and a fascinating history of the writing and publication of this his most renowned work undertaken during Stalin’s repressive regime.

— From The Zhivago Affair

Drawing on newly declassified government files, this is the dramatic story of how a forbidden book in the Soviet Union became a secret CIA weapon in the ideological battle between East and West.

In May 1956, an Italian publishing scout took a train to a village just outside Moscow to visit Russia's greatest living poet, Boris Pasternak. He left carrying the original manuscript of Pasternak's first and only novel, entrusted to him with these words: This is Doctor Zhivago. May it make its way around the world. Pasternak believed his novel was unlikely ever to be published in the Soviet Union, where the authorities regarded it as an irredeemable assault on the 1917 Revolution. But he thought it stood a chance in the West and, indeed, beginning in Italy, Doctor Zhivago was widely published in translation throughout the world.
From there the life of this extraordinary book entered the realm of the spy novel. The CIA, which recognized that the Cold War was above all an ideological battle, published a Russian-language edition of Doctor Zhivago and smuggled it into the Soviet Union. Copies were devoured in Moscow and Leningrad, sold on the black market, and passed surreptitiously from friend to friend. Pasternak's funeral in 1960 was attended by thousands of admirers who defied their government to bid him farewell. The example he set launched the great tradition of the writer-dissident in the Soviet Union.
In The Zhivago Affair, Peter Finn and Petra Couvee bring us intimately close to this charming, passionate, and complex artist. First to obtain CIA files providing concrete proof of the agency's involvement, the authors give us a literary thriller that takes us back to a fascinating period of the Cold War to a time when literature had the power to stir the world.
(With 8 pages of black-and-white illustrations.)

Peter Finn is National Security Editor for The Washington Post and previously served as the Post s bureau chief in Moscow. Petra Couvee is a writer and translator and teaches at Saint Petersburg State University. The Zhivago Affair is their first collaboration together."

"A fast-paced political thriller about a book that terrified a nation."
—Kirkus Reviews

“With groundbreaking reporting and character-rich storytelling, Peter Finn and Petra Couvée uncover the high-stakes drama behind one of the Cold War’s strangest turning points. Passionately written and acutely aware of the historical context, The Zhivago Affair almost makes one nostalgic for a time when novels were so important that even the CIA cared about them.”
—Ken Kalfus, author of A Disorder Peculiar to the Country

“A thrilling literary espionage yarn, but much more than that. Finn and Couvée shed new light on the Cold War struggle for the hearts and minds of millions of people, introducing a cast of characters—poets and spies, idealists and cynics, politicians and dissidents—who could have stepped out of the pages of Doctor Zhivago itself.”
—Michael Dobbs, author of Six Months in 1945: FDR, Stalin, Churchill, and Truman—from World War to Cold War

“A sparkling and fascinating account of how one of the most important novels of the twentieth century found its way back to Russia, a juggernaut of truth thrust into the Soviet darkness. Finn and Couvée elegantly and authoritatively capture Pasternak’s brilliance, the courage of his friends, and the CIA’s hidden role in bringing the forbidden book to Russian readers.”
—David E. Hoffman, author of the Pulitzer Prize–winning The Dead Hand: The Untold Story of the Cold War Arms Race and Its Dangerous Legacy

“The most detailed account to date of the events that suddenly placed one of Russia’s greatest poets in the center of the struggle between Soviet and Western propaganda machines at the height of the Cold War. Pasternak’s personal courage in the face of this totally incongruous conflict is the quality that emerges most clearly from this well-paced narrative, which is especially commendable for its avoidance of all romantic exaggeration—a quality Pasternak himself strove for in Doctor Zhivago. The book is of great relevance today, when such conflicts seem (but only seem) to have disappeared.”
—Richard Pevear, co-translator of Doctor Zhivago