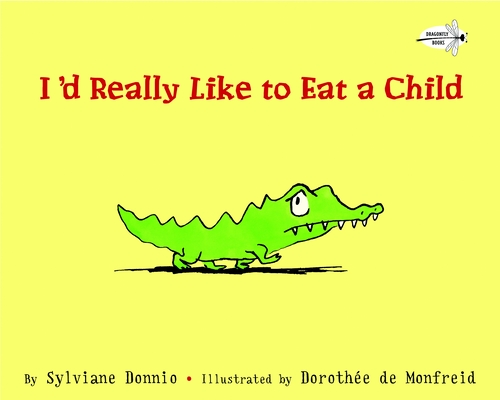 A scrawny little crocodile wants the opportunity to bite off more than he can chew. He's tired of bananas; today he'd like to eat a child. But he's smaller than he thinks, and the little girl he chooses for his first meal puts him in his place—she picks him up and tickles his tummy! The little crocodile is going to have to eat a lot of bananas and grow a lot bigger before he can add children to his menu! Simple yet hilarious artwork brings this droll story to life.

SYLVIANE DONNIO began writing her first children's book at age eight, and stopped after about a dozen lines, promising herself to try again when she was bigger. After studying public law and becoming the mother of three children, she has kept the promise she made to herself. I'd Really Like to Eat a Child, originally published in France, is her first book for the American audience.

DOROTHÉE DE MONFREID began to write and illustrate her ideas with colored pencils back in grade school. Now that she is bigger, she makes her career as an author-illustrator, writing stories published in France about cats, bunnies, elephants, stinky monsters, and even cake.