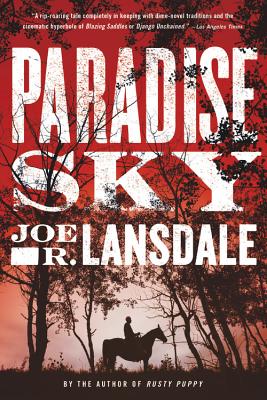 This probable masterpiece in the flavorful oeuvre of the great Joe R, joins LITTLE BIG MAN, TRUE GRIT and Cormac McCarthy's border trilogy in being unique and entertaining literature set in the Old West but above and outside the Western genre.

A rollicking novel about Nat Love, an African-American cowboy with a famous nickname: Deadwood Dick.

Young Willie is on the run, having fled his small Texas farm when an infamous local landowner murdered his father. A man named Loving takes him in and trains him in the fine arts of shooting, riding, reading, and gardening. When Loving dies, Willie re-christens himself Nat Love in tribute to his mentor, and heads west.

In Deadwood, South Dakota Territory, Nat becomes a Buffalo Soldier and is befriended by Wild Bill Hickok. After winning a famous shooting match, Nat's peerless marksmanship and charm earn him the nickname Deadwood Dick, as well as a beautiful woman. But the hellhounds are still on his trail, and they brutally attack Nat Love's love. Pursuing the men who have driven his wife mad, Nat heads south for a final, deadly showdown against those who would strip him of his home, his love, his freedom, and his life.

Joe R. Lansdale is the author of nearly four dozen novels, including Rusty Puppy, the Edgar-award winning The Bottoms, Sunset and Sawdust, and Leather Maiden. He has received nine Bram Stoker Awards, the American Mystery Award, the British Fantasy Award, and the Grinzane Cavour Prize for Literature. He lives with his family in Nacogdoches, Texas.

"Fantastic . . . Lansdale has pulled out all the stops to deliver a rip-roaring tale."—Paula L. Woods, Los Angeles Times

"[A] breakout novel . . . Addictive fun . . . A rollicking ride that's suspenseful, hilarious and satisfyingly redemptive. . . . Lansdale at his funniest and most energetic, with some of the most engaging writing you'll read this year. . . . Lansdale has unleashed something remarkable."—Dwight Silverman, Houston Chronicle

"Joe R. Lansdale takes on Nat Love and the legend of Deadwood Dick in his new novel, Paradise Sky, and hosannas should be sung to him for doing so. Paradise Sky is a remarkable achievement, an instant classic of Western lit. . . . It sometimes seems as if [Lansdale] has published around a thousand novels, and he, no doubt, will publish many more. Paradise Sky may well prove to be Lansdale's best."—W.K. Stratton, Dallas Morning News

"A deftly told yarn. Everything about Paradise Sky is classic Western drama . . . You can almost smell the beans heating up on the campfire and see the rugged beauty of the frontier."—Evan Rodriguez, Austin American-Statesman

"Lansdale is a master storyteller and this novel is a prime example of his talent. Paradise Sky is at times exciting, inspiring, surreal, and heartbreaking. In other words, the novel is true to life."—Josef Hernandez, Examiner.com

"Paradise Sky is a rowdy, funny, suspenseful, and often quite moving yarn."—Booklist (starred)

"This fast-paced Western with its multicultural cast of characters is a winner."—Library Journal (starred)

"It is a full-blooded western, served up unapologetically and masterfully Lansdale-style and set in the 1870s....Paradise Sky is an unblinking and unvarnished look at a rough-edged time and place in United States history, one that never becomes overburdened with the sorrow of tragic events while respecting the good times and recognizing their temporary nature. Lansdale is one of those very rare authors who can have his readers howling with laughter during one sentence while bringing tear to their eyes with the next."—BookReporter

"Reading Joe Lansdale is like listening to a favorite uncle who just happens to be a fabulous storyteller."—Dean Koontz