How Are You Going to Save Yourself (Hardcover) 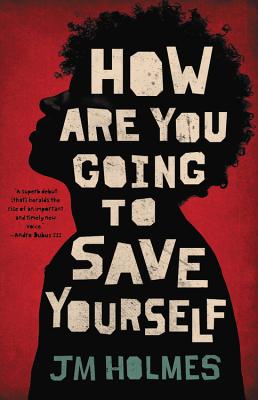 By JM Holmes
$26.00
It's Complicated--Contact Us for More Information

Four young men struggle to liberate themselves from the burden of being black and male in America in an assured debut "as up-to the-minute as a Kendrick Lamar track and as ruefully steeped in eternal truths as a Gogol tale" (Kirkus, starred review).

Bound together by shared experience but pulled apart by their changing fortunes, four young friends coming of age in the postindustrial enclave of Pawtucket, Rhode Island, struggle to liberate themselves from the legacies left to them as black men in America. With potent immediacy and bracing candor, this provocative debut follows a decade in the lives of Dub, Rolls, Rye, and Gio as they each grapple with the complexity of their family histories, the newfound power of sex and drugs, and the ferocity of their desires.

Gio proves himself an unforgettable narrator, beautifully flawed and unstintingly honest, as he recounts both the friends' conflicts and their triumphs. Whether it's a fraught family cookout, a charged altercation on the block, a raucous night in high-society Manhattan gone wrong, or the troubled efforts of a drug hustler to go clean, JM Holmes brings the thump and the heat of his scenes to life with the kind of ease that makes us not just eavesdroppers but participants.

How Are You Going to Save Yourself illuminates in breathtaking detail an entire world-one that has been underrepresented in American fiction. At times funny, often uncomfortable, occasionally disturbing, these stories fearlessly engage with issues of race, sex, drugs, class, and family. Holmes's blistering and timely new voice, richly infused with the unmistakable rhythms of hip-hop that form the sound track to his characters' lives, delivers an indelible fiction that has never been more vital and necessary.

JM Holmes was born in Denver and raised in Rhode Island. He won the Burnett Howe Prize for fiction at Amherst College, and received fellowships to the Iowa Writers' Workshop and the Napa Valley Writers' Conference. He has worked in educational outreach in Iowa, Massachusetts, and Rhode Island. He lives in Milwaukee and is currently at work on a novel.

"Stunning...Devastating...Inescapably staggering...Holmes's literary musicality shines...His lyricism, his depth of prose, pops with quiet authority...His uncanny ear is so delicately rendered that the book not only bursts with life during each back-and-forth, but it evolves...The longing , the regret, the sheer sense of life builds and builds, with Holmes planting plot seeds that sprout, suddenly, as enormous emotional payoffs...How Are You Going to Save Yourself moves to these familiar, lifelike beats, and achieves an electrifying singularity in the process. Though pitched and structured as a story collection, this is a book of novelistic richness."—David Canfield, Entertainment Weekly

"Holmes directly tackles issues of race, class and sex...this wholly original book is a gripping examination of what it is to be a man in America."—Angela Ledgerwood, Esquire

"A shockingly powerful debut collection from a writer whose talent seems almost limitless...It's hard to overstate what an incredible writer Holmes is...How Are You Going to Save Yourself is a stunning accomplishment, a debut book that reads like the work of a writer with decades of experience."—Michael Schaub, NPR

"JM Holmes' debut is a biting thing....Expertly crafted and shudderingly raw, How Are You Going to Save Yourself explores the intersections of race, class, gender, and desire through powerful voices and messy, unforgettable characters."—Maya Gittelman, Bookreporter

"Explosive...A clever exploration of the fractious nature of a camaraderie and codes of masculinity...By turns funny, surprising, and deeply uncomfortable, the lead story culminates in a moment so brutally honest, so quietly ferocious, it left me dazed...Holmes also deftly addresses family dysfunction and the complexity of mixed-race identities...His eye remains unwaveringly unsentimental...The raucous, heartbreaking, bawdy tales in his debut collection possess an assured lyricism, uncompromising in their interrogation of race, class, drugs, and family...How Are You Going to Save Yourself treads the line between humor and pathos, offering sharp insights into the black American experience. Holmes has been compared to Junot Diaz and Ta-Nehisi Coates, but he is a distinctive writer in his own right. Spare in style, strikingly urgent, his is a voice to get excited about."—Irenosen Okojie, Guardian

"Buckle up! JM Holmes's debut grabs you with the first sentence and doesn't let go till it drops you gasping after the last period. This collection offers a tough and heartbreaking vision of masculinity, as powerful as it is uncomfortable. But boy is it worth the ride."—Ayana Mathis, New York Times bestselling author of The Twelve Tribes of Hattie

"JM Holmes writes like someone told him Denis Johnson and Mat Johnson were brothers. These stories are as ferocious and fearless as those of his heroes."—James Hannaham, PEN/Faulkner Award winner for Delicious Foods

"JM Holmes is not just a new voice but a new force: honest, urgent, compelling, often hilarious, and more often gut-wrenching. In How Are You Going to Save Yourself, he writes with remarkable compassion and intelligence about characters whose own compassion and intelligence sometimes betray them. Comparisons to Junot Díaz and Denis Johnson are perhaps inevitable, but I imagine they'll prove short-lived; in a few years we'll be comparing writers to JM Holmes."—Rebecca Makkai, author of The Great Believers

"It is a rare gift to us all when a writer's talents and subject command equal attention, but that is just what we have here in JM Holmes's superb debut, How Are You Going to Save Yourself. Written in spare, colloquial, and deeply evocative prose, these linked stories capture the contemporary lives of young men trying to find their way in this world, young men who also happen to be black in a post-industrial, ever-changing cultural landscape. These powerful stories herald the rise of an important and timely new voice among us, and I will now look for anything by JM Holmes."—Andre Dubus III, New York Times bestselling author of House of Sand and Fog and The Garden of Last Days

"As up-to-the-minute as a Kendrick Lamar track and as
ruefully steeped in eternal truths as a Gogol tale, these stories mark the
debut of an assured young talent in American storytelling."—Kirkus Reviews (starred review)

"In these linked stories, both harrowing and funny, Holmes clarifies what it's like to be young, black, and male in America...Holmes, who won a fellowship to the Iowa Writers' Workshop, is getting a big push."—Library Journal

"A crackling debut...Holmes proves his ability to navigate vulnerability, as well as his fearlessness in tackling tense situations head-on, all of which combines for a collection of superb stories."—Publishers Weekly

"Holmes's writing is fresh, and his dialogue rings true. He doesn't shy away from difficult subject matter or from showing his characters' flaws, which makes for some incredibly tough scenes to read, but also highlights the everyday travails of black men in America. Readers looking for timely, nuanced fiction about race and masculinity should definitely pick this up."—Booklist