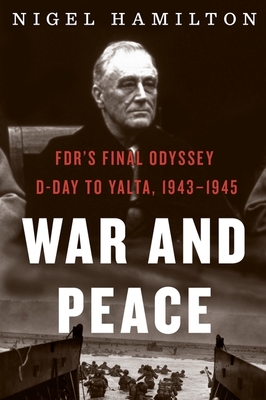 This is book number 3 in the FDR at War series.

The stirring climax to Nigel Hamilton’s three-part saga of FDR at war—proof that he was the Second World War’s key strategist, even on his deathbed

Nigel Hamilton’s celebrated trilogy culminates with a story of triumph and tragedy. Just as FDR was proven right by the D-day landings he had championed, so was he found to be mortally ill in the spring of 1944. He was the architect of a victorious peace that he would not live to witness.

Using hitherto unpublished documents and interviews, Hamilton rewrites the famous account of World War II strategy given by Winston Churchill in his memoirs. Seventy-five years after the D-day landings we finally get to see, close-up and in dramatic detail, who was responsible for rescuing, and insisting upon, the great American-led invasion of France in June 1944, and why the invasion was led by Eisenhower. As FDR’s D-day triumph turns to personal tragedy, we watch with heartbreaking compassion the course of the disease, and how, in the months left him as US commander in chief, the dying president attempted at Hawaii, Quebec, and Yalta to prepare the United Nations for an American-backed postwar world order. Now we know: even on his deathbed, FDR was the war’s great visionary.

NIGEL HAMILTON is a best-selling and award-winning biographer of President John F. Kennedy, General Bernard “Monty” Montgomery, and President Bill Clinton, among other subjects. His most recent book, The Mantle of Command: FDR at War, 1941–1942, was long-listed for the National Book Award. He is a senior fellow at the McCormack Graduate School, University of Massachusetts, Boston, and splits his time between Boston, Massachusetts, and New Orleans, Louisiana.

“A first-class, lens-changing work.” — James N. Mattis, former US secretary of defense   "If history belongs to the best and latest writer, Nigel Hamilton has won the war for Roosevelt’s legacy from Churchill."— Wall Street Journal   "Compelling...as gripping and powerfully argued as the first two." — New York Times Book Review   “Thorough and deliberate . . . Vividly recreates FDR’s decline and makes his accomplishments all the more impressive. Like its predecessors in the trilogy, this volume will reward readers of World War II and presidential history.” — Publishers Weekly   “Significant study . . . of considerable interest to students of presidential and American military history.” — Kirkus Reviews   “With deft storytelling and impeccable scholarship, Nigel Hamilton completes his essential trilogy of FDR and World War II with a bang. War and Peace is a masterful reevaluation of D-day, Hitler’s demise, and the Yalta Conference. A stunning achievement!” — Douglas Brinkley, author of Rightful Heritage: Franklin D. Roosevelt and the Land of America     “On the occasion of the 75th anniversary of D-day, War and Peace is the dramatic culmination of Nigel Hamilton’s magnificent trilogy of FDR’s wartime leadership as commander in chief. It is also a vivid example of the critical importance of presidential leadership in times of national crisis. This sweeping narrative of Roosevelt’s triumphs and the tragedy of his untimely death in 1945 is history and biography at its very finest.” — Carlo D’Este, author of Patton: A Genius for War and Warlord: A Life of Winston Churchill at War, 1874–1945   PRAISE FOR COMMANDER IN CHIEF   “Ably dramatizes Roosevelt’s wranglings with Churchill during World War II . . . Provocative . . . It is stimulating to follow Hamilton as he lays out his argument.” — Thomas E. Ricks, New York Times Book Review   “Superb.” — Fareed Zakaria   “A detailed look at Franklin Roosevelt’s role in the Allied strategy midway through World War II, with an emphasis on his relations with Winston Churchill. Hamilton shows Roosevelt’s clear vision of how to win the war and how to create a postwar society that would prevent such wars from recurring . . . [Commander in Chief] presents a convincing portrait of its main subject, strengthening readers’ confidence in the author’s conclusions. The book is strongly pro-Roosevelt, but Hamilton gives a solid inside view of the strategic thinking that went into the campaign against Hitler as America laid the groundwork for the D-day invasion the following year.” — Kirkus Reviews, starred review    PRAISE FOR MANTLE OF COMMAND  “The Mantle of Command is splendid: It’s the memoir Roosevelt didn’t get to write.”  — New York Times Book Review  “Masterly.”  — Wall Street Journal  “FDR has frequently been underestimated as a military leader, yielding, in the historical imagination, to George Marshall and Winston Churchill, among others. Nigel Hamilton attacks this view with his characteristic verve, portraying a president with the reins of war fully, if often subtly, in his hands. The conventional wisdom will never —