Under The Wave At Waimea (Hardcover) 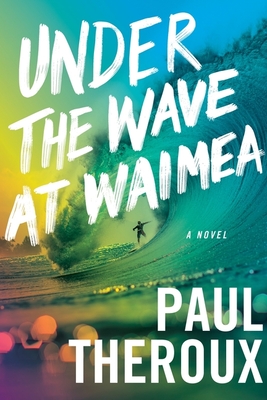 I thought as I began this novel that it was a reminiscence by a middle-aged Hawaiian surfer dude about his youth of waves, drugs, and girls.  And superficially it is, but it is also a moving meditation on mortality, complacence, and self-knowledge.  Theroux is as always a masterful storyteller, and the descriptive passages about the ocean and the sublimity of surfing are alone worth the price of admission.

— From Under the Wave at Waimea

From legendary writer Paul Theroux comes an atmospheric novel following a big-wave surfer as he confronts aging, privilege, mortality, and whose lives we choose to remember.

Now in his sixties, big-wave surfer Joe Sharkey has passed his prime and is losing his “stoke.” The younger surfers around the breaks on the north shore of Oahu still idolize the Shark, but his sponsors are looking elsewhere. One night, while driving home from a bar after one too many, Joe accidentally kills a stranger near Waimea, a tragedy that sends his life out of control. As the repercussions of the accident spiral ever wider, Joe's devoted girlfriend, Olive, throws herself into uncovering the dead man’s identity and helping Joe find vitality and refuge in the waves again.

Set in the lush, gritty underside of an island paradise readers rarely see, UNDER THE WAVE AT WAIMEA offers a dramatic, affecting commentary on privilege, mortality, and the lives we choose to remember. It is a masterstroke by one of the greatest writers of our time.

PAUL THEROUX is the author of many highly acclaimed books. His novels include The Lower River, Jungle Lovers, and The Mosquito Coast, and his renowned travel books include Ghost Train to the Eastern Star and Dark Star Safari. He lives in Hawaii and on Cape Cod.

“For a generation of backpackers now gone gray, the tattered paperback accounts of [Paul Theroux's] treks through China, Africa and South America were a prod to adventure, bibles of inspiration under many a mosquito net.”  —Gal Beckerman for the New York Times "Incantatory, ecstatic, hypnotic...One of Theroux’s best novels.” —Seattle Times “Immersive…[Theroux’s] fans will appreciate the perfectly rendered exotic setting, which takes the reader deep inside the Hawaiian surf culture.”  —Publishers Weekly   “Devotees of Kem Nunn's Tapping the Source who have been searching for the next great surfing novel need search no more. In flowing, lyrical prose, Theroux celebrates the sheer individualistic exhilaration of riding waves.” —Booklist, starred review   “Extraordinary. A frightening ride to the bottom of the soul of a man with a previously unexamined life. This is contemporary Hawaii as it’s rarely evoked, with surfing strangely near its troubled heart.” —William Finnegan, author of Barbarian Days, winner of the Pulitzer Prize    —