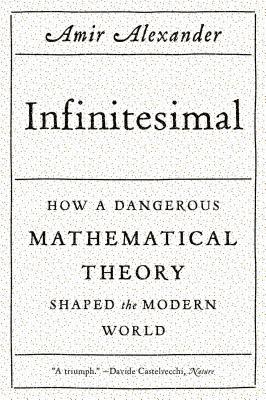 Pulsing with drama and excitement, Infinitesimal celebrates the spirit of discovery, innovation, and intellectual achievement-and it will forever change the way you look at a simple line.

On August 10, 1632, five men in flowing black robes convened in a somber Roman palazzo to pass judgment on a deceptively simple proposition: that a continuous line is composed of distinct and infinitely tiny parts. With the stroke of a pen the Jesuit fathers banned the doctrine of infinitesimals, announcing that it could never be taught or even mentioned. The concept was deemed dangerous and subversive, a threat to the belief that the world was an orderly place, governed by a strict and unchanging set of rules. If infinitesimals were ever accepted, the Jesuits feared, the entire world would be plunged into chaos.

In Infinitesimal, the award-winning historian Amir Alexander exposes the deep-seated reasons behind the rulings of the Jesuits and shows how the doctrine persisted, becoming the foundation of calculus and much of modern mathematics and technology. Indeed, not everyone agreed with the Jesuits. Philosophers, scientists, and mathematicians across Europe embraced infinitesimals as the key to scientific progress, freedom of thought, and a more tolerant society. As Alexander reveals, it wasn't long before the two camps set off on a war that pitted Europe's forces of hierarchy and order against those of pluralism and change.

The story takes us from the bloody battlefields of Europe's religious wars and the English Civil War and into the lives of the greatest mathematicians and philosophers of the day, including Galileo and Isaac Newton, Cardinal Bellarmine and Thomas Hobbes, and Christopher Clavius and John Wallis. In Italy, the defeat of the infinitely small signaled an end to that land's reign as the cultural heart of Europe, and in England, the triumph of infinitesimals helped launch the island nation on a course that would make it the world's first modern state.

From the imperial cities of Germany to the green hills of Surrey, from the papal palace in Rome to the halls of the Royal Society of London, Alexander demonstrates how a disagreement over a mathematical concept became a contest over the heavens and the earth. The legitimacy of popes and kings, as well as our beliefs in human liberty and progressive science, were at stake-the soul of the modern world hinged on the infinitesimal.

Amir Alexander teaches history at the University of California, Los Angeles. He is the author of Infinitesimal, Geometrical Landscapes, and Duel at Dawn. His writing has appeared in The New York Times and the Los Angeles Times, and his work has been featured in Nature and The Guardian, on NPR, and elsewhere. He lives in Los Angeles, California.

“You probably don't think of the development of calculus as ripe material for a political thriller, but Amir Alexander has given us just that in Infinitesimal.” —Jordan Ellenberg, The Wall Street Journal

“Packed with vivid detail and founded on solid scholarship, [Infinitesimal] is both a rich history and a gripping page turner.” —Jennifer Ouellette, The New York Times Book Review

“Alexander pulls off the impressive feat of putting a subtle mathematical concept centre stage in a ripping historical narrative . . . this is a complex story told with skill and verve, and overall Alexander does an excellent job . . . There is much in this fascinating book.” —Times Higher Education

“Every page of this book displays Alexander's passionate love of the history of mathematics. He helps readers refigure problems from over the centuries with him, creating pleasurable excursions through Euclid, Archimedes, Galileo, Cavalieri, Torricelli, Hobbes, and Wallis while explaining how seemingly timeless and abstract problems were deeply rooted in different worldviews. Infinitesimal captures beautifully a world on the cusp of inventing calculus but not quite there, struggling with what might be lost in the process of rendering mathematics less certain and familiar.” —Paula E. Findlen, The Chronicle of Higher Education

“With a sure hand, Mr. Alexander links mathematical principles to seminal events in Western cultural history, and has produced a vibrant account of a disputatious era of human thought, propelled in no small part by the smallest part there is.” —Alan Hirshfeld, The Wall Street Journal

“Infinitesimal is a gripping and thorough history of the ultimate triumph of [a] mathematical tool . . . If you are fascinated by numbers, Infinitesimal will inspire you to dig deeper into the implications of the philosophy of mathematics and of knowledge.” —New Scientist

“Brilliantly documented . . . Alexander shines . . . the story of the infinitesimals is fascinating.” —Owen Gingerich, The American Scholar

“Back in the 17th century, the unorthodox idea [of infinitesimals], which dared to suggest the universe was an imperfect place full of mathematical paradoxes, was considered dangerous and even heretical . . . Alexander puts readers in the middle of European intellectuals' public and widespread battles over the theory, filling the book's pages with both formulas and juicy character development.” —Bill Andrews, Discover

“In Infinitesimal: How a Dangerous Mathematical Theory Shaped the Modern World, Amir Alexander successfully weaves a gripping narrative of the historical struggle over the seemingly innocuous topic of infinitesimals. He does an excellent job exploring the links between the contrasting religious and political motivations that lead to acceptance or refusal of the mathematical theory, skillfully breathing life into a potentially dry subject. Infinitesimal will certainly leave its readers with a newfound appreciation for the simple line, occasion for such controversy in the emergence of modern Europe.” —Emilie Robert Wong, The Harvard Book Review

“Alexander tells this story of intellectual strife with the high drama and thrilling tension it deserves, weaving a history of mathematics through the social and religious upheavals that marked much of the era . . .The author navigates even the most abstract mathematical concepts as deftly as he does the layered social history, and the result is a book about math that is actually fun to read. A fast-paced history of the singular idea that shaped a multitude of modern achievements.” —Kirkus (starred review)

“[Infinitesimal] gives readers insight into a real-world Da Vinci Code–like intrigue with this look at the history of a simple, yet pivotal, mathematical concept . . . Alexander explores [a] war of ideas in the context of a world seething with political and social unrest. This in-depth history offers a unique view into the mathematical idea that became the foundation of our open, modern world.” —Publishers Weekly

“A bracing reminder of the human drama behind mathematical formulas.” —Bryce Christensen, Booklist

“A gripping account of the power of a mathematical idea to change the world. Amir Alexander writes with elegance and verve about how passion, politics, and the pursuit of knowledge collided in the arena of mathematics to shape the face of modernity. A page-turner full of fascinating stories about remarkable individuals and ideas, Infinitesimal will help you understand the world at a deeper level.” —Edward Frenkel, Professor of Mathematics, University of California, Berkeley, and author of Love and Math

“In this fascinating book, Amir Alexander vividly re-creates a wonderfully strange chapter of scientific history, when fine-grained arguments about the foundations of mathematical analysis were literally matters of life and death, and fanatical Jesuits and English philosophers battled over the nature of geometry, with the fate of their societies hanging in the balance. You will never look at calculus the same way again.” —Jordan Ellenberg, Professor of Mathematics, University of Wisconsin–Madison, and author of How Not to Be Wrong

“You may find it hard to believe that illustrious mathematicians, philosophers, and religious thinkers would engage in a bitter dispute over infinitely small quantities. Yet this is precisely what happened in the seventeenth century. In Infinitesimal, Amir Alexander puts this fascinating battle in historical and intellectual context.” —Mario Livio, astrophysicist, Space Telescope Science Institute, and author of Brilliant Blunders

“With considerable wit and unusual energy, Amir Alexander charts the great debate about whether mathematics could be reduced to a rigorous pattern of logical and orderly deductions or whether, instead, it could be an open-ended and exciting endeavor to explore the world's mysteries. Infinitesimal shows why the lessons of mathematics count so much in the modern world.” —Simon Schaffer, Professor of the History of Science, University of Cambridge

“In Infinitesimal, Amir Alexander offers a new reading of the beginning of the modern period in which mathematics plays a starring role. He brings to life the protagonists of the battle over infinitesimals as if they were our contemporaries, while preserving historical authenticity. The result is a seamless synthesis of cultural history and storytelling in which mathematical concepts and personalities emerge in parallel. The history of mathematics has rarely been so readable.” —Michael Harris, Professor of Mathematics, Columbia University and Université Paris Diderot

“We thought we knew the whole story: Copernicus, Galileo, the sun in the center, the Church rushing to condemn. Now this remarkable book puts the deeply subversive doctrine of atomism and its accompanying mathematics at the heart of modern science.” —Margaret C. Jacob, Distinguished Professor of History, University of California, Los Angeles