Survival Is a Style: Poems (Paperback) 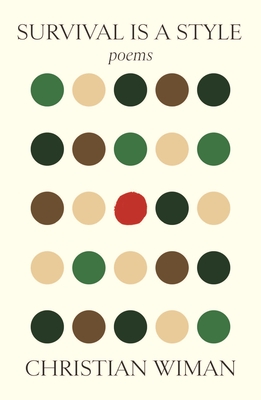 Survival Is a Style, Christian Wiman’s first collection of new poems in six years, may be his best book yet.

His many readers will recognize the musical and formal variety, the voice that can be tender and funny, credibly mystical and savagely skeptical. But there are many new notes in this collection as well, including a moving elegy to the poet’s father, sharp observations and distillations of modern American life, and rangy poems that merge and juxtapose different modes of speech and thought. The cumulative effect is extraordinary.

Reading Survival Is a Style, one has the sense one is encountering work that will become a permanent part of American literature.

Christian Wiman is the author of several books, including the memoirs My Bright Abyss: Meditation of a Modern Believer (FSG, 2013) and He Held Radical Light: The Art of Faith, the Faith of Art (FSG, 2018); Every Riven Thing (FSG, 2010), winner of the Ambassador Book Award in poetry; Once in the West (FSG, 2014), a National Book Critics Circle Award finalist in poetry; and Stolen Air: Selected Poems of Osip Mandelstam. He teaches religion and literature at the Yale Institute of Sacred Music and Yale Divinity School.

"Wiman’s greatest asset is his taste for simplicity . . . But these simple melodies are not without deep resonance and even occasional dissonance, as themes of spiritual doubt and physical illness recur throughout the book’s four sections . . . So thoroughly charmed was I that I failed to notice I had boarded the wrong train, hopping off just before it tore out of Manhattan—though I would have indeed welcomed a moment more in Wiman’s musical company." —Elinor Hitt, The Paris Review

"In this new collection, his poetry takes us, once more, on a metaphysical trip through the essential ‘aloneness’ of Being and its endless manifestations. Wiman’s art is concerned with holding mirrors up to our (seemingly) godless existence, searching for hidden divinity in everyday reflections . . . there is great virtuosity and variance of subject to be found within — but above all it is a struggle, a struggle for faith, for understanding, and for acceptance." —Ryan Asmussen, Chicago Review of Books

"This slim book of poems reads as if it were the husk of a magnificent novel. This is partly the effect of Wiman’s style, which has deepened—allowing for some of the lighter touches that admirers of his memoirs will recognize . . . Wiman accomplishes a single narrative arc through the idiosyncrasies of a poetry that will always honor the word over the message. That word is mortal, its survival a style." —Arthur Willemse, World Literature Today

"[Survival Is a Style] rings with hard-wrung truths . . . These poems, which vary widely in their forms, are held together by the poet’s sensibility, each word sparking joy in its sound and texture . . . Wrestling with the self, skepticism, and faith, this collection is a radiant addition to Wiman’s oeuvre." —Publishers Weekly

"The collection’s title yokes Wiman’s directness and aloofness together; the phrase is declarative and whimsical, hard-won and smirk-worthy, provocative and requires a double-take . . . Perhaps the tricks of metaphor such as irony and smoke of artifice have no place in the poetic scene Wiman establishes. He wants a starker sense of verse which makes the description of the clothing all the more ridiculous. Bared humanity we all recognize will survive." —Spencer Reece, The Kenyon Review

"Wiman, for all his spiritual wrangling, is a poet of things, and Survival Is a Style contains some sonically sparkling poems whose raucous music defies too much quiet contemplation." —Declan Ryan, Times Literary Supplement