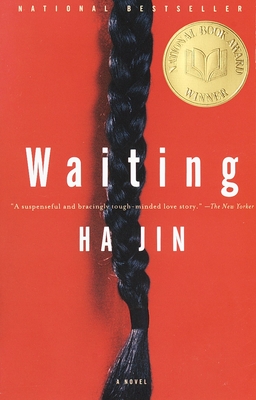 From the widely acclaimed author—a rich and atmospheric novel about a man living in two worlds, struggling with the conflicting claims of two utterly different women.

The demands of human longing contend with the weight of centuries of custom in acclaimed author Ha Jin’s Waiting, a novel of unexpected richness and universal resonance. Every summer Lin Kong, a doctor in the Chinese Army, returns to his village to end his loveless arranged marriage with the humble and touchingly loyal Shuyu. But each time Lin must return to the city to tell Manna Wu, the educated, modern nurse he loves, that they will have to postpone their engagement once again. Caught between the conflicting claims of these two utterly different women and trapped by a culture in which adultery can ruin lives and careers, Lin has been waiting for eighteen years. This year, he promises will be different.

"Ha Jin profoundly understands the conflict between the individual and society, between the timeless universality of the human heart and constantly shifting politics of the moment. With wisdom, restraint, and empathy for all his characters, he vividly reveals the complexities and subtleties of a world and a people we desperately need to know."—Judges' Citation, National Book Award

"In Waiting, Ha Jin portrays the life of Lin Kong, a dedicated doctor torn by his love for two women: one who belongs to the New China of the Cultural Revolution, the other to the ancient traditions of his family's village. Ha Jin profoundly understands the conflict between the individual and society, between the timeless universality of the human heart and constantly shifting politics of the moment. With wisdom, restraint, and empathy for all his characters, he vividly reveals the complexities and subtleties of a world and a people we desperately need to know."—Judges' Citation, National Book Award

"Ha Jin's novel could hardly be less theatrical, yet we're immediately engaged by its narrative structure, by its wry humor and by the subtle, startling shifts it produces in our understanding of characters and their situation."—The New York Times Book Review

"Subtle and complex--his best work to date. A moving meditation on the effects of time upon love." —The Washington Post

"Luminous. . . . Eloquent. . . . [Waiting] provides. . . a crash course in Chinese society during and since the Cultural Revolution, and a more leisurely but nonetheless compelling exploration of the less exotic terrain that is the human heart." —The New York Times Book Review

"Waiting has the stripped down simplicity of a fable. . . It casts a spell that doesn't break once. . . . Jin has the kind of effortless command that most writers can only dream about." —The New York Times Magazine

“Achingly beautiful. . . . Ha Jin depicts the details of social etiquette, of food, of rural family relationships and the complex yet alarmingly primitive fabric of provincial life with that absorbed passion for minutiae characteristic of Dickens and Balzac.” —Los Angeles Times Book Review

“A vivid bit of storytelling, fluid and earthy. . . . Reminiscent of Hemingway in its scope, simplicity and precise language. . . . A graceful human allegory.” —Chicago Sun-Times

“Spare but compelling. . . . Jin’s craftsmanship and grasp of the universal language of the human heart make the book a worthwhile read.” —USA Today

“A wry, lovely novel. . . . Unexpectedly moving. . . . So quietly and carefully told that . . . we read on patiently, pleasantly distracted, wondering when something will happen. Only when we’ve finished do we understand just how much has, and how much waiting can be its own painful reward.” —Newsday

“Enlightening . . . a delicate rendering of the universal complications of love. . . . Ha Jin’s natural storytelling quietly captures the texture of daily life in a dual Chinese culture. . . . No detail is extraneous in this sad, funny, and often wise novel.” —The Village Voice Literary Supplement

“A wonderfully ironic novel . . . complex and sad as life. . . . It captures the difficulties of love in totalitarian China with sharp prose and a convincing portrayal of human vagaries.” —Minneapolis Star Tribune

“Subtle and complex . . . his best work to date. A moving meditation on the effects of time upon love.” —The Washington Post

“[Jin] reveals some startlingly original insights on human life and love . . . in a narrative that dazzles the reader with its simplicity and grace.” —The Providence Sunday Journal

“[Waiting is] a masterpiece of realism and a work of ironic allegory, its mystifying, foreign world full of characters who grow more familiar with every page. . . . Through an accumulation of small, deft brushstrokes, 20th century China is superimposed onto the landscape of an ancient, painted scroll.” —The Plain Dealer

“A high achievement indeed.” —The New York Review of Books