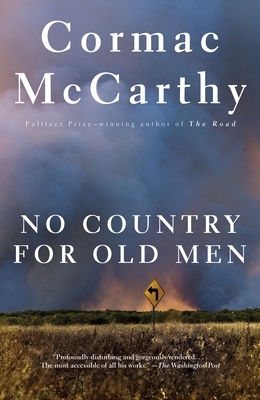 From the bestselling, Pulitzer Prize–winning author of The Road comes a "profoundly disturbing and gorgeously rendered" novel (The Washington Post) that returns to the Texas-Mexico border, setting of the famed Border Trilogy.

The time is our own, when rustlers have given way to drug-runners and small towns have become free-fire zones. One day, a good old boy named Llewellyn Moss finds a pickup truck surrounded by a bodyguard of dead men. A load of heroin and two million dollars in cash are still in the back. When Moss takes the money, he sets off a chain reaction of catastrophic violence that not even the law—in the person of aging, disillusioned Sheriff Bell—can contain.

As Moss tries to evade his pursuers—in particular a mysterious mastermind who flips coins for human lives—McCarthy simultaneously strips down the American crime novel and broadens its concerns to encompass themes as ancient as the Bible and as bloodily contemporary as this morning’s headlines.

No Country for Old Men is a triumph.

The novels of the American writer, CORMAC McCARTHY, have received a number of literary awards, including the Pulitzer Prize, the National Book Award, and the National Book Critics Circle Award. His works adapted to film include All the Pretty Horses, The Road, and No Country for Old Men—the latter film receiving four Academy Awards, including the award for Best Picture.

“Profoundly disturbing and gorgeously rendered. The most accessible of all his works.” —Washington Post

“A narrative that rips along like hell on wheels [in a] race with the devil [on] a stage as big as Texas.” —The New York Times Book Review

“Expertly staged and pitilessly lighted. It feels like a genuine diagnosis of the postmillennial malady, a scary illumination of the oncoming darkness.” —Time

“A cause for celebration. He is nothing less than our greatest living writer, and this is a novel that must be read and remembered.” —Houston Chronicle