In the Pond: A Novel (Vintage International) (Paperback) 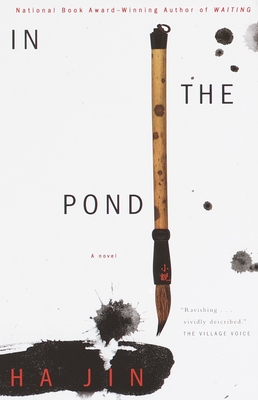 By Ha Jin
Not Available
Email online@portersquarebooks.com to Check Availability

National Book Award-winner Ha Jin's arresting debut novel ,  In the Pond, is a darkly funny portrait of an amateur calligrapher who wields his delicate artist's brush as a weapon against the powerful party bureaucrats who rule his provincial Chinese town.

Shao Bin is a downtrodden worker at the Harvest Fertilizer Plant by day and an aspiring artist by night. Passed over on the list to receive a decent apartment for his young family, while those in favor with the party's leaders are selected ahead of him, Shao Bin chafes at his powerlessness. When he attempts to expose his corrupt superiors by circulating satirical cartoons, he provokes an escalating series of merciless counterattacks that send ripples beyond his small community. Artfully crafted and suffused with earthy wit, In the Pond is a moving tale about humble lives caught up in larger social forces.

Ha Jin left his native China in 1985 to attend Brandeis University. He is the author of the internationally bestselling novel Waiting, which won the PEN/Faulkner Award and the National Book Award, and War Trash, which won the PEN/Faulkner Award for Fiction, and was a Finalist for the Pulitzer Prize and the Kiriyama Pacific Rim Book Prize; the story collections The Bridegroom, which won the Asian American Literary Award, Under the Red Flag, which won the Flannery O’Connor Award for Short Fiction, and Ocean of Words, which won the PEN/Hemingway Award; the novels The Crazed and In the Pond; and three books of poetry. His latest novel, A Free Life is his first novel set in the United States. He lives in the Boston area and is a professor of English at Boston University.War Trash, The Crazed, The Bridegroom, Waiting, In the Pond, and Ocean of Words are available in paperback from Vintage Books.

"Though art and politics figure in the action, In the Pond is first and foremost a comedy-naughty, lusty, raucously entertaining. Ha Jin's language echoes working-class Chinese at its rough, bawdy best." —The New York Times Book Review