The Light of Day (Paperback) 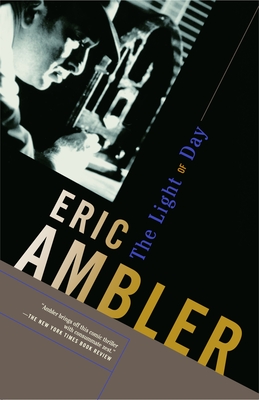 By Eric Ambler
$15.00
It's Complicated--Contact Us for More Information

— From Light of Day

The Light of Day was the basis for Jules Dassin’s classic film, Topkapi.

When Arthur Abdel Simpson first spots Harper in the Athens airport, he recognizes him as a tourist unfamiliar with city and in need of a private driver. In other words, the perfect mark for Simpson’s brand of entrepreneurship. But Harper proves to be more the spider than the fly when he catches Simpson riffling his wallet for traveler’s checks. Soon Simpson finds himself blackmailed into driving a suspicious car across the Turkish border. Then, when he is caught again, this time by the police, he faces a choice: cooperate with the Turks and spy on his erstwhile colleagues or end up in one of Turkey’s notorious prisons. The authorities suspect an attempted coup, but Harper and his gang of international jewel thieves have planned something both less sinister and much, much more audacious.

Eric Ambler was born in London in 1909. Before turning to writing full-time, he worked at an engineering firm, and wrote copy for an advertising agency. His first novel was published in 1936. During the course of his career, Ambler was awarded two Gold Daggers, a Sliver Dagger, and a Diamond Dagger from the Crime Writers Association of Great Britain, named a Grand Master by the Mystery Writers Association of America, and made an Officer of the Order of the British Empire by the Queen Elizabeth. In addition to his novels, Ambler wrote a number of screenplays, including A Night to Remember and The Cruel Sea, which won him an Oscar nomination. Eric Ambler died in 1998.

“Rely on Mr. Ambler to serve a hot thriller in a cool style.” --The Christian Science Monitor

“Ambler towers over most of his newer imitators.” —Los Angeles Times

"Arthur Abdel Simpson . . . is one of fiction's most delightful rogues, and his adventures provide the best Ambler entertainment in years." --Anthony Boucher

“Ambler may well be the best writer of suspense stories. . . . He is the master craftsman.” —Life

“Ambler is, quite simply, the best.” —The New Yorker