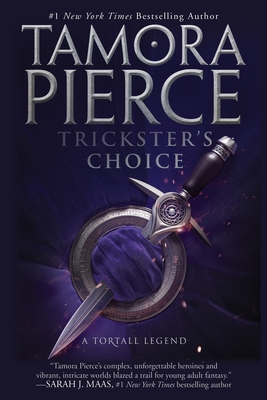 When you gamble with kingdoms, all bets are off. Legends are born in this thrilling and New York Times bestselling spy saga from the fantasy author who is legend herself: Tamora Pierce.

Aly is from a family known for great deeds. She is the daughter of Alanna, the famed knight and King’s Champion of Tortall. But even though she is bold and brave, like her mother, her true talents lie on her father’s side, in the art of spying.

When Aly is captured by pirates and sold as a slave to an exiled royal family in the faraway Copper Isles, she strikes a bargain with the trickster god. If she can keep young noblewomen Sarai and Dove safe for the summer, then he will return Aly to her family. The task should be simple, but Sarai and Dove are anything but. It’s a time of murderous plotting at court, and Aly will need to rely on her training and the insights of a strange young man named Nawat to survive in a world where trust can cost you your life.

“Tamora Pierce’s books shaped me not only as a young writer but also as a young woman. She is a pillar, an icon, and an inspiration. Cracking open one of her marvelous novels always feels like coming home.”
—SARAH J. MAAS, #1 New York Times bestselling author

TAMORA PIERCE is the #1 New York Times bestselling author of over eighteen novels set in the fantasy realm of Tortall. She first captured the imagination of readers with her debut novel, Alanna: The First Adventure. Since then, her bestselling and award-winning titles have pushed the boundaries of fantasy and young adult novels to introduce readers to a rich world populated by strong, believable heroines. Her books have been translated into many languages, and some are available on audio from Listening Library and Full Cast Audio. In 2013, she won the Margaret A. Edwards Award for her “significant and lasting contribution to young adult literature.” Pierce lives in Syracuse, New York, with her husband, Tim, and their cats, birds, and occasional rescued wildlife. Visit her at TamoraPierce.com and follow her on Twitter at @TamoraPierce.

“Tamora Pierce’s books shaped me not only as a young writer but also as a young woman. Her complex, unforgettable heroines and vibrant, intricate worlds blazed a trail for young adult fantasy—and I get to write what I love today because of the path she forged throughout her career. She is a pillar, an icon, and an inspiration. Cracking open one of her marvelous novels always feels like coming home.”
—SARAH J. MAAS, #1 New York Times bestselling author

“In the world of YA fantasy, there’s before Tamora Pierce, and then after her female heroes started kicking down the doors (and walls, and other barriers)!”
—BRUCE COVILLE, New York Times bestselling author

“It’s impossible to overstate Tamora Pierce’s impact on children’s literature. Her tough, wise, and wonderful heroines have inspired generations of readers. Her encouragement of up-and-coming authors is unparalleled. Thank you, Tammy, for Alanna and Beka and more, for your generosity of spirit, for your incredible legacy.”
—RAE CARSON, New York Times bestselling author

“Tamora Pierce is a trailblazer for so many fantasy writers, hacking through the old tropes with her narrative machete and showing us that girl-centered adventures are not just possible but amazing. Many of us might have peered at the impenetrable thicket of traditional fantasy and given up before we even began, if not for her.”
—RACHEL HARTMAN, New York Times bestselling author

“Tamora Pierce’s writing is like water from the swiftest, most refreshingly clear, invigorating, and revitalizing river. I return to her books time and time again.”
—GARTH NIX, New York Times bestselling author

“Tamora Pierce’s novels gave me a different way of seeing the world. They were like nothing I’d encountered before. Alanna stormed her way into my thirteen-year-old heart and told me that I could write gorgeous, complicated novels about vibrantly real people in fantastic situations, and, to be honest, she’s never left.”
—ALAYA DAWN JOHNSON, award-winning author of Love Is the Drug

“Tamora Pierce is the queen of YA fantasy, and we are all happy subjects in her court.”
—JESSICA CLUESS, author of A Shadow Bright and Burning