The Great Trouble: A Mystery of London, the Blue Death, and a Boy Called Eel (Paperback) 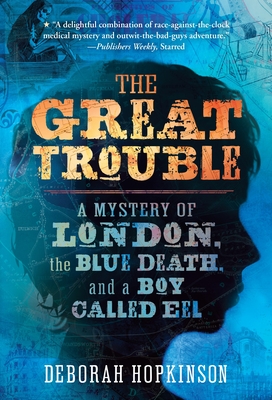 The suspenseful tale of two courageous kids and one inquisitive scientist who teamed up to stop an epidemic.

Eel has troubles of his own: As an orphan and a “mudlark,” he spends his days in the filthy River Thames, searching for bits of things to sell. He’s being hunted by Fisheye Bill Tyler, and a nastier man never walked the streets of London. And he’s got a secret that costs him four precious shillings a week to keep safe. But even for Eel, things aren’t so bad until that fateful August day in 1854—the day the deadly cholera epidemic (“blue death”) comes to Broad Street.

Everyone believes that cholera is spread through poisonous air. But one man, Dr. John Snow, has a different theory. As the epidemic surges, it’s up to Eel and his best friend, Florrie, to gather evidence to prove Dr. Snow’s theory—before the entire neighborhood is wiped out.

“For [readers] who love suspense, drama, and mystery.” —TIME for Kids

DEBORAH HOPKINSON has written more than 40 books for young readers. Her picture books include Sky Boys: How They Built the Empire State Building, an ALA-ALSC Notable Children's Book and a Boston Globe-Horn Book Honor Book; Abe Lincoln Crosses a Creek, an ALA-ALSC Notable Children's Book and a Junior Library Guild Selection; A Boy Called Dickens; and the ALA Notable Book Apples to Oregon. She is also the author of the middle-grade novel Into the Firestorm: A Novel of San Francisco, 1906. Visit her at DeborahHopkinson.com.

Starred Review, School Library Journal, October 2013:
"Although detailing a dire period in history, Eel tells his story in a matter-of-fact and accessible manner, making his story palatable and entertaining."