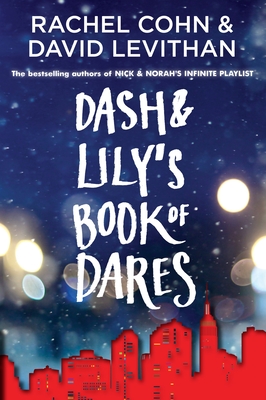 This is book number 1 in the Dash & Lily Series series.

What could be better than a Christmas-time scavenger hunt in New York City? When Lily's parents leave her and her brother alone for Christmas, she is devastated, and in an effort to cheer her up, her brother encourages her to leave a journal in a book at the Strand, prompting a back and forth scavenger hunt around the city. When Dash, with a Scrooge-like attitude toward Christmas, picks up the journal, it sets off a series of adventures all over the city that makes me laugh and warms my heart every time. I read this one every year, and I promise it will make you Christmas season brighter.

— From Dash and Lily's Book of Dares

“When Lily finds most of her family gone for the Christmas holidays, her brother decides she needs an adventure and encourages her to leave a red notebook full of challenges on her favorite bookstore shelf, waiting for the right guy to come along and find it. Dash finds it and passes it back, beginning a hilarious exchange of dares and crosstown trips. Cohn and Levithan, authors of Nick & Nora's Infinite Playlist, have crafted another gem of a novel.”
— Cathy Berner, Blue Willow Bookshop, Houston, TX

“I’ve left some clues for you.
If you want them, turn the page.
If you don’t, put the book back on the shelf, please.”

16-year-old Lily has left a red notebook full of challenges on her favorite bookstore shelf, waiting for just the right guy to come along and accept its dares. Dash, in a bad mood during the holidays, happens to be the first guy to pick up the notebook and rise to its challenges.

What follows is a whirlwind romance as Dash and Lily trade dares, dreams, and desires in the notebook they pass back and forth at locations all across New York City. But can their in-person selves possibly connect as well as their notebook versions, or will their scavenger hunt end in a comic mismatch of disastrous proportions?

Co-written by Rachel Cohn (GINGERBREAD) and David Levithan, co-author of WILL GRAYSON, WILL GRAYSON with John Green (THE FAULT IN OUR STARS), DASH & LILY'S BOOK OF DARES is a love story that will have readers scouring bookstore shelves, looking and longing for a love (and a red notebook) of their own.

Rachel Cohn & David Levithan have written three books together. Their first, Nick & Norah’s Infinite Playlist, was made into a movie starring Michael Cera and Kat Dennings, directed by Peter Sollett. Their second, Naomi and Ely’s No Kiss List, was named a New York Public Library Book for the Teen Age. For their third book, Dash & Lily’s Book of Dares, David wrote Dash’s chapters and Rachel wrote Lily’s. Although they did not pass the chapters back and forth in a red Moleskine notebook, they did email them to each other without planning anything out beforehand. That’s the way they work.

For more information about Rachel and David, you can find them at RachelCohn.com and DavidLevithan.com, respectively. You may also catch them in the aisles at the Strand.