We'll Always Have Casablanca: The Life, Legend, and Afterlife of Hollywood's Most Beloved Movie (Hardcover) 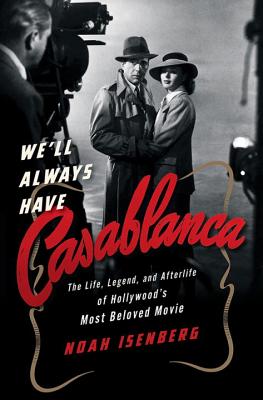 By Noah Isenberg
Not Available
Email online@portersquarebooks.com to Check Availability

Behind the scenes of one of the defining movies of the twentieth century, from the real refugees playing refugees on-screen to how the Brattle Theatre helped make it a classic.

— From We'll Always Have Casablanca

For the 75th anniversary of its premiere—the incredible story of how Casablanca was made and why it remains the most beloved of Hollywood films.

Casablanca was first released in 1942, just two weeks after the city of Casablanca itself surrendered to American troops led by General Patton. Featuring a pitch-perfect screenplay, a classic soundtrack, and unforgettable performances by Humphrey Bogart, Ingrid Bergman, and a deep supporting cast, Casablanca was hailed in the New York Times as “a picture that makes the spine tingle and the heart take a leap.” The film won Oscars for best picture, best director, and best screenplay, and would go on to enjoy more revival screenings than any other movie in history. It became so firmly ensconced in the cultural imagination that, as Umberto Eco once said, Casablanca is “not one movie; it is ‘movies.’ ”

We’ll Always Have Casablanca is celebrated film historian Noah Isenberg’s rich account of this most beloved movie’s origins. Through extensive research and interviews with filmmakers, film critics, family members of the cast and crew, and diehard fans, Isenberg reveals the myths and realities behind Casablanca’s production, exploring the transformation of the unproduced stage play into the classic screenplay, the controversial casting decisions, the battles with Production Code censors, and the effect of the war’s progress on the movie’s reception. Isenberg particularly focuses on the central role refugees from Hitler’s Europe played in the production (nearly all of the actors and actresses cast in Casablanca were immigrants).

Finally, Isenberg turns to Casablanca’s long afterlife and the reasons it remains so revered. From the Marx Brothers’ 1946 spoof hit, A Night in Casablanca, to loving parodies in New Yorker cartoons, Saturday Night Live skits, and Simpsons episodes, Isenberg delves into the ways the movie has lodged itself in the American psyche.

Filled with fresh insights into Casablanca’s creation, production, and legacy, We’ll Always Have Casablanca is a magnificent account of what made the movie so popular and why it continues to dazzle audiences seventy-five years after its release.

Noah Isenberg is professor and chair of the department of radio-television-film at the University of Texas at Austin, the author of We'll Always Have Casablanca, Edgar G. Ulmer: A Filmmaker at the Margins, editor of Weimar Cinema, and the recipient of an NEH Public Scholar Award.

Isenberg gives us . . . a rich miscellany of material that will delight fans of both the film and Hollywood’s golden era. His research is clearly second to none.
— Lucy Scholes - Times Literary Supplement

Combining trenchant analysis of the film’s poetic and political power with a well-researched and playful account of its legacy, We’ll Always Have Casablanca is a necessary book and perhaps even an urgent one.

Fascinating, packed with fun trivia . . . but also profoundly relevant in [its exploration] of how our politics and creative industries not only hold a mirror to each other but also to the nation.
— Rebecca Prime - Los Angeles Times

We'll Always Have Casablanca is a hugely readable and entertaining look at how Casablanca came to be, and how it came to be such an indelible part of American pop culture.

Four out of four stars. . . . A lively account of the making of the 1942 Warner Bros. classic and why it has endured as 'Hollywood's Most Beloved Movie.'
— Bill Desowitz - USA Today

A treasure trove of information . . . but also everything else you could ask for: the fascinating process of coming up with the script, the cast's relation on the set,and the movie's long afterlife in popular culture, right down to the latest SNL parody. Noah Isenberg has produced a delightful page-turner of a book, perfect for every movie fan.
— David Mikics - Tablet

As Noah Isenberg details in his excellent new book We’ll Always Have Casablanca, the 1942 film is a case study of how history gets depicted for popular entertainment, but it is also a powerful example of how the Hollywood machine produced work that intersected with political commitment while still holding fast to its romantic conventions.