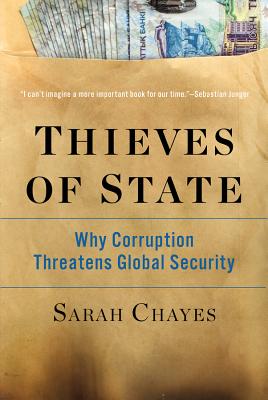 "I can’t imagine a more important book for our time." —Sebastian Junger

The world is blowing up. Every day a new blaze seems to ignite: the bloody implosion of Iraq and Syria; the East-West standoff in Ukraine; abducted schoolgirls in Nigeria. Is there some thread tying these frightening international security crises together? In a riveting account that weaves history with fast-moving reportage and insider accounts from the Afghanistan war, Sarah Chayes identifies the unexpected link: corruption.

Since the late 1990s, corruption has reached such an extent that some governments resemble glorified criminal gangs, bent solely on their own enrichment. These kleptocrats drive indignant populations to extremes—ranging from revolution to militant puritanical religion. Chayes plunges readers into some of the most venal environments on earth and examines what emerges: Afghans returning to the Taliban, Egyptians overthrowing the Mubarak government (but also redesigning Al-Qaeda), and Nigerians embracing both radical evangelical Christianity and the Islamist terror group Boko Haram. In many such places, rigid moral codes are put forth as an antidote to the collapse of public integrity.

The pattern, moreover, pervades history. Through deep archival research, Chayes reveals that canonical political thinkers such as John Locke and Machiavelli, as well as the great medieval Islamic statesman Nizam al-Mulk, all named corruption as a threat to the realm. In a thrilling argument connecting the Protestant Reformation to the Arab Spring, Thieves of State presents a powerful new way to understand global extremism. And it makes a compelling case that we must confront corruption, for it is a cause—not a result—of global instability.

An award-winning former NPR correspondent, foreign policy expert, and entrepreneur with ten years’ experience in Afghanistan, Sarah Chayes is an associate at the Carnegie Endowment and the author of The Punishment of Virtue. She lives in Washington, DC.

Makes a strong case that acute corruption causes not only social breakdown but also violent extremism. . . . An important book that should be required reading for officials in foreign service, and for those working in commerce or the military. The story will interest the nonspecialist reader too.
— Giles Foden - New York Times Book Review

Should be required reading.
— Thomas Friedman

[A] fascinating story. . . . [T]he central revelation in Thieves of the State: at a certain point, systemic corruption became not just a lamentable by-product of the war but an accelerant of conflict . . . Chayes argues, convincingly, [that state-sanctioned larceny is] a threat not just to Afghanistan’s national security but to that of the United States.

[Chayes] tells the story of what happened in Afghanistan brilliantly, and compares her experience there with the current corruption in Egypt, Russia and the dismal rest . . . [a] page-turner.
— Deirdre N. McCloskey - Wall Street Journal

A vivid, ground-level view on how pervasive corruption undermines U.S. foreign policy and breeds insurgency. Thieves of State provides critical lessons that all policymakers should heed.

Sarah Chayes brilliantly illuminates a topic no one wants talk about—but we must. Corruption is an insidious force that is causing some of the most dangerous challenges our world is facing. It has to be at the core of America’s strategies, engagements and relationships for the twenty-first century.
— Admiral (ret.) Mike Mullen, former chairman of the Joint Chiefs of Staff