These Truths: A History of the United States (Hardcover) 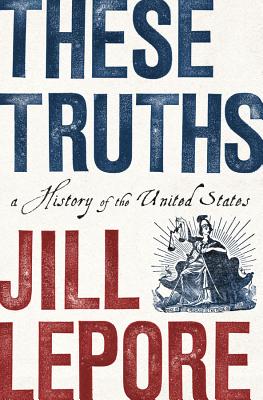 With a country large and varied as the United States there likely will never be a definitive single-volume history. With These Truths Lepore gives us a largely political history though one informed by the many insights produced by changes in historical methodology over the last few decades. Lepore is always a joy to read. She keeps this book lively and entertaining by focusing on individual lives involved in some of the key dramas that illuminate the how and why of our past.

In the most ambitious one-volume American history in decades, award-winning historian and New Yorker writer Jill Lepore offers a magisterial account of the origins and rise of a divided nation, an urgently needed reckoning with the beauty and tragedy of American history.

Written in elegiac prose, Lepore’s groundbreaking investigation places truth itself—a devotion to facts, proof, and evidence—at the center of the nation’s history. The American experiment rests on three ideas—"these truths," Jefferson called them—political equality, natural rights, and the sovereignty of the people. And it rests, too, on a fearless dedication to inquiry, Lepore argues, because self-government depends on it. But has the nation, and democracy itself, delivered on that promise?

These Truths tells this uniquely American story, beginning in 1492, asking whether the course of events over more than five centuries has proven the nation’s truths, or belied them. To answer that question, Lepore traces the intertwined histories of American politics, law, journalism, and technology, from the colonial town meeting to the nineteenth-century party machine, from talk radio to twenty-first-century Internet polls, from Magna Carta to the Patriot Act, from the printing press to Facebook News.

Along the way, Lepore’s sovereign chronicle is filled with arresting sketches of both well-known and lesser-known Americans, from a parade of presidents and a rogues’ gallery of political mischief makers to the intrepid leaders of protest movements, including Frederick Douglass, the famed abolitionist orator; William Jennings Bryan, the three-time presidential candidate and ultimately tragic populist; Pauli Murray, the visionary civil rights strategist; and Phyllis Schlafly, the uncredited architect of modern conservatism.

Americans are descended from slaves and slave owners, from conquerors and the conquered, from immigrants and from people who have fought to end immigration. "A nation born in contradiction will fight forever over the meaning of its history," Lepore writes, but engaging in that struggle by studying the past is part of the work of citizenship. "The past is an inheritance, a gift and a burden," These Truths observes. "It can’t be shirked. There’s nothing for it but to get to know it."

Jill Lepore is the David Woods Kemper ’41 Professor of American History at Harvard University, where she teaches classes in evidence, historical methods, the humanities, and American political history. Her one-semester undergraduate course on the history of the United States features weekly debates in which students use primary sources to argue over competing historical interpretations of turning points in American history. She is the author of The Name of War: King Philip's War and the Origins of American Identity (winner of the Bancroft Prize), New York Burning: Liberty, Slavery and Conspiracy in Eighteenth-Century Manhattan (a finalist for the Pulitzer Prize), The Secret History of Wonder Woman (winner of the American History Book Prize), and many other titles. She is also a staff writer at The New Yorker, host of the podcast The Last Archive, and she was named the winner of the Hannah Arendt Prize for Political Thought in 2021.

[B]rilliant…insightful…It isn’t until you start reading it that you realize how much we need a book like this one at this particular moment.
— Andrew Sullivan - New York Times Book Review

This sweeping, sobering account of the American past is a story not of relentless progress but of conflict and contradiction, with crosscurrents of reason and faith, black and white, immigrant and native, industry and agriculture rippling through a narrative that is far from completion.
— New York Times Book Review (editors' choice)

[Lepore’s] one-volume history is elegant, readable, sobering; it extends a steadying hand when a breakneck news cycle lurches from one event to another, confounding minds and churning stomachs.
— Jennifer Szalai - New York Times

Jill Lepore is an extraordinarily gifted writer, and These Truths is nothing short of a masterpiece of American history. By engaging with our country's painful past (and present) in an intellectually honest way, she has created a book that truly does encapsulate the American story in all its pain and all its triumph.

Lepore’s brilliant book, These Truths, rings as clear as a church bell, the lucid, welcome yield of clear thinking and a capable, curious mind.

This vivid history brings alive the contradictions and hypocrisies of the land of the free.
— David Aaronovitch - The Times

A history for the 21st century, far more inclusive than the standard histories of the past.
— Guardian

Monumental…a crucial work for presenting a fresh and clear-sighted narrative of the entire story…exciting and page-turningly fascinating, in one of those rare history books that can be read with pleasure for its sheer narrative energy.
— Simon Winchester - New Statesman

In her epic new work, Jill Lepore helps us learn from whence we came.
— O, The Oprah Magazine

With this epic work of grand chronological sweep, brilliantly illuminating the idea of truth in the history of our republic, Lepore reaffirms her place as one of one of the truly great historians of our time.
— Henry Louis Gates Jr., Harvard University

Astounding…[Lepore] has assembled evidence of an America that was better than some thought, worse than almost anyone imagined, and weirder than most serious history books ever convey.
— Casey N. Cep - Harvard Magazine

‘An old-fashioned civics book,’ Harvard historian and New Yorker contributor Jill Lepore calls it, a glint in her eye. This fat, ludicrously ambitious one-volume history is a lot more than that. In its spirit of inquiry, in its eager iconoclasms, These Truths enacts the founding ideals of the country it describes.

It's an audacious undertaking to write a readable history of America, and Jill Lepore is more than up to the task. But These Truths is also an astute exploration of the ways in which the country is living up to its potential, and where it is not.

Gutsy, lyrical, and expressive…[These Truths] is a perceptive and necessary contribution to understanding the American condition of late.…It captures the fullness of the past, where hope rises out of despair, renewal out of destruction, and forward momentum out of setbacks.

No one has written with more passion and brilliance about how a flawed and combustible America kept itself tethered to the transcendent ideals on which it was founded.
— Gary Gerstle, author of Liberty and Coercion

Without ignoring the horrors of conquest, slavery, or recurring prejudices, Lepore manages nonetheless to capture the epic quality of the American past.
— Lynn Hunt, author of History: Why it Matters

Lepore knows that the ‘story of America’ is as plural and mutable as the nation itself, and the result is a work of prismatic richness, one that rewards not just reading but rereading. This will be an instant classic.
— Kwame Anthony Appiah, author of The Lies that Bind

In this inspiring and enlightening book, Jill Lepore accomplishes the grand task of telling us what we need to know about our past in order to be good citizens today.
— Walter Isaacson, University Professor of History, Tulane, author of The Innovators

In this time of disillusionment with American politics, Jill Lepore’s beautifully written book should be essential reading for everyone who cares about the country’s future. Her history of the United States reminds us of the dilemmas that have plagued the country and the institutional strengths that have allowed us to survive as a republic for over two centuries. At a minimum, her book should be required reading for every federal officeholder.
— Robert Dallek, author of Franklin D. Roosevelt

Who can write a comprehensive yet lucid history of the sprawling United States in a single volume? Only Jill Lepore has the verve, wit, range, and insights to pull off this daring and provocative book. Interweaving many lively biographies, These Truths illuminates the origins of the passions and causes, which still inspire and divide Americans in an age that needs all the truth we can find.