Demonic Males: Apes and the Origins of Human Violence (Paperback) 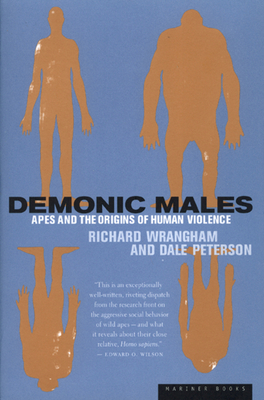 Whatever their virtues, men are more violent than women. Why do men kill, rape, and wage war, and what can we do about it?

Based on human evolution studies and about our closest living relatives, the great apes, Demonic Males presents a compelling argument that the secrets of a peaceful society may well be, first, a sharing of power between males and females, and second, a high level and variety of sexual activity, both homosexual and heterosexual.

Dramatic, vivid, and sometimes shocking, but firmly grounded in meticulous scientific research, Demonic Males will stir controversy and debate. It will be required reading for anyone concerned about the spiral of violence undermining human society.

Dale Peterson is the coauthor with Jane Goodall of Visions of Caliban (a New York Times Notable Book and a Library Journal Best Book) and the editor of her two books of letters, Africa in My Blood and Beyond Innocence. His other books include The Deluge and the Ark, Chimpanzee Travels, Storyville USA, Eating Apes, and (with Richard Wrangham) Demonic Males. They have been distinguished as an Economist Best Book, a Discover Top Science Book, a Bloomsbury Review Editor's Favorite, a Village Voice Best Book, and a finalist for the PEN New England Award and the Sir Peter Kent Conservation Book Prize in England. He resides in Massachusetts.

Wrangham ia a professor of biological anthropology at Harvard University.

"The heroes of this fascinating account of primate behavior and evolution are bonobos, members of a species closely related to both humans and chimpanzees but distinguished by its comparatively nonviolent and relatively egalitarian social structure. Wrangham and Peterson look to studies of bonobo social organization and behavior for insight into social mechanisms to control human violence. The influence of sociobiology is evident at every step in the authors' (which the authors dub "Galton's error"). The book is an accessible, gripping, sometimes surprising account of the depth and extent of violent behavior among primates as well as a provocative discussion of its origins and possible remedies." Booklist, ALA —