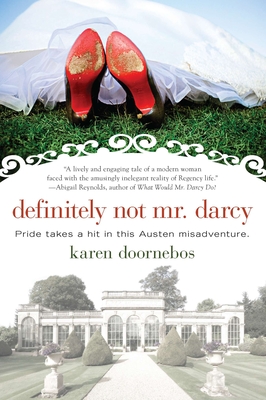 Stressed out mid-western mom in love with all things Austen applies for a part in a British documentary set in the Regency era.  She finds herself instead in the middle of a reality dating show and has to resort to some ingenious wiles, both contemporary and historical, in order to win the guy and the cash.  A light hearted romp perfect for Valentine's Day with the added bonus of lots of Jane Austen inspired clothes and manners.

Susannah
— From Definitely Not Mr. Darcy by Karen Doomebos

There's no place for pride in this Austen misadventure.

Chloe Parker was born two centuries too late. A thirty-nine-year- old divorced mother, she runs her own antique letterpress business, is a lifelong member of the Jane Austen Society, and gushes over everything Regency. But her business is failing, threatening her daughter's future. What's a lady to do?

Why, audition for a Jane Austen-inspired TV show set in England, of course.

What Chloe thinks is a documentary turns out to be a reality dating show set in 1812. Eight women are competing to snare Mr. Wrightman, the heir to a gorgeous estate, along with a $100,000 prize. So Chloe tosses her bonnet into the ring, hoping to transform from stressed-out Midwest mom to genteel American heiress and win the money. With no cell phones, indoor plumbing, or deodorant to be found, she must tighten her corset and flash some ankle to beat out women younger, more cutthroat, and less clumsy than herself. But the witty and dashing Mr. Wrightman proves to be a prize worth winning, even if it means the gloves are off...

Karen Doornebos is an English Literature graduate of University of Wisconsin-Madison and a lifelong member of the Jane Austen Society of North America. She lives in Illinois.