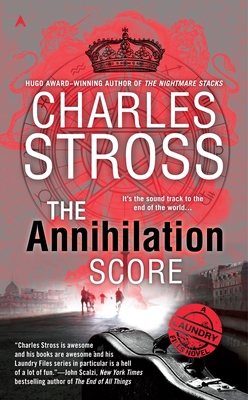 By Charles Stross
$7.99
It's Complicated--Contact Us for More Information

This is book number 6 in the A Laundry Files Novel series.

From the Hugo Award-winning author of The Rhesus Chart comes another supernatural case from The Laundry Files...

Unfortunately, one of those supernatural threats has come between Mo and Bob. An antique violin, an Erich Zahn original, made of white human bone, was designed to produce music capable of slaughtering demons. Mo is the custodian of this unholy instrument. It invades her dreams and yearns for the blood of her colleagues—and her husband. And despite Mo’s proficiency as a world-class violinist, it cannot be controlled…

Charles Stross, born in 1964, is a full-time science fiction writer and resident of Edinburgh, Scotland. He is the author of seven Hugo-nominated novels, including Accelerando, Neptune’s Brood, Saturn’s Children and The Laundry Files series, and winner of three Hugo Awards for best novella. Stross has had his work translated into more than twelve languages. He has worked as a pharmacist, software developer, and tech-industry journalist.

“Charles Stross is awesome and his books are awesome and his Laundry Files series in particular is a hell of a lot of fun.”—John Scalzi, New York Times bestselling author of The End of All Things

“A quirky, hysterical and cerebral thriller that is practically impossible to put down.”—CK2’s Kwips and Kritiques