Brown Girl in the Ring (Paperback) 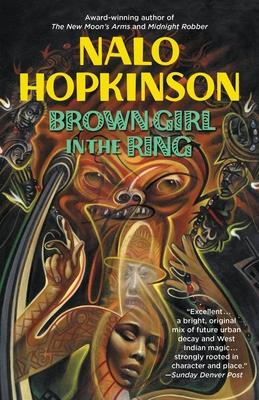 In this "impressive debut" from award-winning speculative fiction author Nalo Hopkinson, a young woman must solve the tragic mystery surrounding her family and bargain with the gods to save her city and herself. (The Washington Post)

The rich and privileged have fled the city, barricaded it behind roadblocks, and left it to crumble. The inner city has had to rediscover old ways -- farming, barter, herb lore. But now the monied need a harvest of bodies, and so they prey upon the helpless of the streets. With nowhere to turn, a young woman must open herself to ancient truths, eternal powers, and the tragic mystery surrounding her mother and grandmother. She must bargain with gods, and give birth to new legends.

Nalo Hopkinson was born in Jamaica and has lived in Guyana, Trinidad, and Canada. The daughter of a poet/playwright and a library technician, she has won numerous awards including the John W. Campbell Award, the World Fantasy Award, and Canada's Sunburst Award for literature of the fantastic. Her award-winning short fiction collection Skin Folk was selected for the 2002 New York Times Summer Reading List and was one of the New York Times Best Books of the Year.
Hopkinson is also the author of The New Moon's Arms, The Salt Roads, Midnight Robber, and Brown Girl in the Ring. She is a professor of creative writing at the University of California, Riverside, and splits her time between California, USA, and Toronto, Canada.

"A wonderful sense of narrative and a finely tuned ear for dialogue...balances a well-crafted and imaginative story with incisive social critique and a vivid sense of place."—Emerge

"Hopkinson's writing is smooth and assured, and her characters lively and believable. She has created a vivid world of urban decay and startling, dangerous magic, where the human heart is both a physical and metaphorical key."—Publisher's Weekly

"Splendid....Superbly plotted and redolent of the rhythms of Afro-Caribbean speech."—Kirkus Review