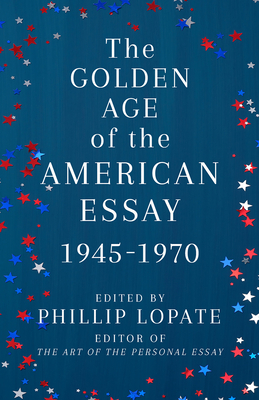 The three decades that followed World War II were an exceptionally fertile period for American essays. The explosion of journals and magazines, the rise of public intellectuals, and breakthroughs in the arts inspired a flowering of literary culture. At the same time, the many problems that confronted mid-century America—racism, sexism, nuclear threat, war, poverty, and environmental degradation among them—proved fruitful topics for America's best minds.

PHILLIP LOPATE is the author of To Show and to Tell: The Craft of Literary Nonfiction and of four essay collections, Bachelorhood, Against Joie de Vivre, Portrait of My Body, and Portrait Inside My Head. He is the editor of the anthologies The Art of the Personal Essay, Writing New York, and American Movie Critics. He was awarded a John Simon Guggenheim Fellowship, a New York Public Library Center for Scholars and Writers Fellowship, two National Endowment for the Arts grants, and two New York Foundation for the Arts grants. He is professor of writing at Columbia University's nonfiction MFA program, and lives in Brooklyn, New York.

“What’s marvelous is the way Lopate’s anthologies . . . manage to be not only comprehensive monuments of deep expertise, but such continuously fresh and thrilling reading companions.” —Jonathan Lethem, author of The Feral Detective

“Phillip Lopate is one of the most brilliant and original essayists now working.” —Louise Glück, winner of the 2020 Nobel Prize in Literature