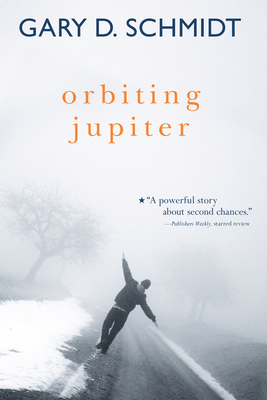 In this riveting novel, two boys discover the true meaning of family and the sacrifices it requires.

After spending time in a juvenile facility, he’s placed with a foster family on a farm in rural Maine. Here Joseph, damaged and withdrawn, meets twelve-year-old Jack, who narrates the account of the troubled, passionate teen who wants to find his baby at any cost.

When Jack meets his new foster brother, he knows three things about him:

What Jack doesn't know, at first, is how desperate Joseph is to find his baby girl. Or how urgently he, Jack, will want to help.

But the past can't be shaken off.  Even as new bonds form, old wounds reopen. The search for Jupiter demands more from Jack than he can imagine.

This tender, heartbreaking novel is Gary D. Schmidt at his best. He is the author of the Printz Honor and Newbery Honor Book Lizzie Bright and the Buckminster Boy; Okay for Now, a National Book Award finalist; and The Wednesday Wars, a Newbery Honor Book, among his many acclaimed novels for young readers.

Gary D. Schmidt is the best-selling author of many books for young readers, including Just Like That; National Book Award finalist Okay for Now; Pay Attention, Carter Jones; Orbiting Jupiter; the Newbery Honor and Printz Honor Book Lizzie Bright and the Buckminster Boy; and the Newbery Honor Book The Wednesday Wars. He is a professor of English at Calvin University in Grand Rapids, Michigan.

"The ending is bittersweet but as satisfying as a two-box-of-tissues tearjerker can possibly be (in the realm of juvenile fiction, Schmidt is the master of the emotional gut-punch)."  — Horn Book Magazine

"Told in Jack's spare, direct first-person voice, this story's style demonstrates the beautify of simplicity as it delineates the lives of its characters, each as superbly realized as the tumultuous New England setting." — Booklist (starred review)

"A powerful story about second chances, all the more devastating because not everyone gets one." — Publishers Weekly (starred review)